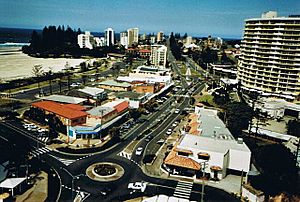 Tweed Heads is the right part of the image

Tweed Heads is a city in New South Wales. It is located on the Tweed River in north-eastern New South Wales, Australia, in Tweed Shire. Tweed Heads is located next to the border with Queensland, adjacent to its "Twin Town" of Coolangatta, which is a suburb of the Gold Coast. It is often referred to as a town where people can change time zones – even celebrate New Year twice within an hour – simply by crossing the street, due to its proximity to the Queensland border, and the fact that New South Wales observes daylight saving whereas Queensland does not.

In 1823 John Oxley was the first European to see the Tweed Valley, and he wrote of it: "A deep rich valley clothed with magnificent trees, the beautiful uniformity of which was only interrupted by the turns and windings of the river, which here and there appeared like small lakes. The background was Mt. Warning. The view was altogether beautiful beyond description. The scenery here exceeded anything I have previously seen in Australia."

Timber cutters originally moved to the Tweed Valley in 1844. After the timber had been cleared, farmers moved in with bananas, cane and dairy farming dominating the area, while a fishing industry developed. The first school opened in 1871. 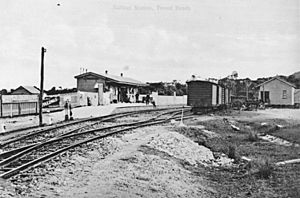 Tweed Heads was once connected to the Queensland Railways system, with the South Coast line providing a direct connection to Brisbane. The railway opened on 10 August 1903 It had been hoped that the New South Wales government would extend their railway line from Murwillumbah to Tweed Heads, but this did not occur due to cost of resuming the land and the expenses associated with the tunnel and bridge that would be required. The Tweed Heads railway station was located on the western side of Enid Street between Bay Street and Frances Street (28°10′19″S 153°32′27″E﻿ / ﻿28.17193°S 153.54073°E﻿ / -28.17193; 153.54073﻿ (Tweed Heads railway station)). The railway line to Brisbane closed in 1961; the site of the station has been converted to parklands and commercial development.

The Tweed Shire, inclusive Murwillumbah was declared in 1947.

Given its closeness to the Gold Coast, Tweed Heads has a shared economy with Coolangatta based heavily on tourism.

Tweed Heads' most popular tourist destinations include Mount Warning, one of the largest shield volcanoes in the Southern Hemisphere, and the nearby Nightcap, Border Ranges, Springbrook and Lamington National Parks, which abound with sub-tropical fauna and flora.

In the 2011 census, Tweed Heads recorded a population of 7,525 people made up of 52.8 percent female and 47.2 percent male. The median age of the population was 54 years, 17 years above the Australian median. This has made the Tweed Heads region a prime location for retirement living, with 14 separate retirement villages. Australian born residents comprised 71.1 percent of people living in Tweed Heads followed by England 6 percent, New Zealand 4.5 percent, Scotland 1.1 percent, Philippines 0.9 percent and China 0.8 percent. Eighty-seven percent speak English as their first language, followed by 0.7 percent Mandarin, 0.6 percent Portuguese, 0.5 percent Tagalog, 0.3 percent Italian and 0.3 percent Spanish.

Below are a list of retirement villages and retirement living facilities in the Tweed Region:

Due to its close proximity, Tweed Heads sports teams often compete in Gold Coast/Queensland-based competitions. Tweed Heads was once home to several iterations of professional rugby league clubs in the New South Wales Rugby League (NSWRL) competition between 1988-1995. The Gold Coast-Tweed Giants were established in 1988 and based out of the Tweed Heads Seagulls premises in west Tweed Heads. The Seagulls ran a very successful social club that turned large profits due to poker machines and by 1990 the club had acquired the Giants' NSWRL licence and rebranded the team to become the Gold Coast Seagulls, despite remaining based in Tweed Heads. The team pulled off its biggest coup in 1990 when it signed future Rugby League Immortal Wally Lewis. After years of poor on field results and low attendances, the Seagulls sold their NSWRL licence to businessman Jeff Muller who moved the team to Carrara on the Gold Coast.

All content from Kiddle encyclopedia articles (including the article images and facts) can be freely used under Attribution-ShareAlike license, unless stated otherwise. Cite this article:
Tweed Heads, New South Wales Facts for Kids. Kiddle Encyclopedia.