G:link, also known as the Gold Coast Light Rail, is a light rail system serving the Gold Coast in Queensland, Australia. The system forms part of the TransLink's South East Queensland public transport network and consists of a single 13-kilometre (8.1 mi) line of sixteen stations. Gold Coast University Hospital is the northern terminus of the system, while Broadbeach South is the southern terminus. The line opened on 20 July 2014.

In preparation for the 2018 Commonwealth Games, a 7.3-kilometre (4.5 mi) northern extension that will terminate at Helensvale railway station is scheduled to open in 2018.

The Gold Coast is one of the fastest growing regions in Australia, with an annual population growth of 2 - 3%. The project was first proposed in the Gold Coast City Council Transport Plan 1996 after some years of consideration and review. In 2002 the Queensland and Australian Governments each contributed $650,000 to fund the Gold Coast Light Rail Feasibility Study. In 2004 the draft summary report was released. 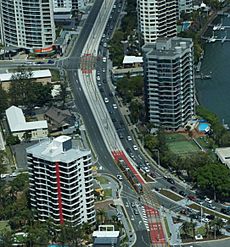 View of the line from the Q1 building

By November 2013 much of the work was complete with the southern section at Broadbeach being the only section of trackwork to be completed. Testing commenced on the northern section of the line in October 2013. The line opened on 20 July 2014, with a free travel day, before normal operations began on 21 July.

The system had significant impact on property both directly and indirectly in the corridor. A total of $170 million was allocated for property resumptions. The Queens Park Tennis Club and Southport Croquet Club were both relocated. 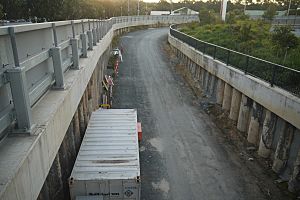 A planned 7.3-kilometre extension will run from the current northern terminus at Gold Coast University Hospital to Helensvale railway station, where interchange would be provided with Queensland Rail services to and from Brisbane. Intermediate stops would be constructed at Parkwood East and Parkwood. Additional car parking would be provided at Helensvale and a new car park would be included at Parkwood. Four new trams have been ordered to service the extension. The end-to-end journey time on the extension would be 11 min.

In March 2015, the Queensland Government indicated its support for a northern extension to meet the Gold Coast railway line, subject to the Australian Government and Gold Coast City Council agreeing to help fund the extension. The Gold Coast City Council was supportive and proposed a route from Griffith University to Parkwood and Helensvale. Despite no funding from the Australian Government being forthcoming, Expressions of Interest to construct a northern extension were called in August 2015. Six submissions were received. The potential for the Australian Government to make a contribution towards funding the project increased following a leadership spill in September that saw Malcolm Turnbull replace Tony Abbott as Australian Prime Minister. Resulting discussions between the state and federal governments led the Queensland Government to believe they were "very close" to securing a federal contribution. In October, the Queensland Government requested GoldLinQ proceed to the Request for Tender stage of the procurement process. The three parties invited to tender were John Holland Group, Leighton Contractors and GamesLinQ - a joint venture between Downer EDI Works and BMD Constructions.

Later in October it was announced that funding agreements had been reached with the Australian Government and Gold Coast City Council. The federal contribution is $95 million and the council contribution $55 million. The total cost of the project is $420 million. Bids to construct the extension closed in late December 2015 with the contract awarded to CPB Contractors (formerly Leighton Contractors) in March 2016. Major construction began in July 2016 and the extension is expected to be operational in time for the Gold Coast Commonwealth Games - to be held in April 2018.

The Queensland Government is also funding a separate project to duplicate the Gold Coast railway line between Helensvale and Coomera - the last single track section of the line. The second track is expected to be finished in late 2017 and will allow more frequent train services between Helensvale and Brisbane.

Gold Coast City Council is planning for a third stage of the line. The council released a list of potential routes for stage three in November 2015 and invited public comment. Ideas included a southern extension from Broadbeach to Burleigh Heads, two options from Nobby Beach to Robina station, from Varsity Lakes station to Burleigh Heads, from Varsity Lakes station to Gold Coast Airport and two options from Burleigh Heads to Gold Coast Airport. 3606 people responded to the survey. Nearly 80 percent supported an extension to Burleigh Heads and 70 percent also supported a further extension to the airport. Citing the “overwhelming” support for an airport connection, in March 2016 Gold Coast Mayor Tom Tate announced a $600,000 feasibility study into a southern extension from Broadbeach to the Gold Coast Airport as part of his successful campaign to retain the mayoralty at that month's local government election. The extension is estimated to cost $1.54 billion. The council would contribute around $160 million but the remainder of the cost would require funding from the higher tiers of government. Tate suggested the link would open by March 2020, although some other councillors feel this date is unrealistic. In February 2017, the New South Wales Government announced it would investigate potential routes for a southern extension from the Queensland border to Tweed Heads. The Queensland Government expressed some support for a cross-border route.

A coastal extension had previously attracted some support from the council and state government. Both levels of government have released maps that show plans for the trams to eventually connect with the airport. However a coastal route from Burleigh to the New South Wales border is understood to be fraught with engineering challenges, including how to get around Burleigh headland and across both Tallebudgera and Currumbin Creeks.

Further extension plans involve numerous proposed spurlines. Proposals from Griffith University to Harbour Town, from Main Beach to The Spit, from Surfers Paradise to Bundall, from Nobby Beach to Robina, from Broadbeach to Nerang railway station, and from Burleigh Heads to Varsity Lakes railway station have been made. 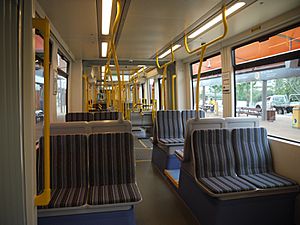 The Gold Coast Rapid Transit fleet consists of 14 Flexity 2 trams built by Bombardier Transportation in Germany. The trams feature low floors and have dedicated spaces for wheelchairs, prams and surfboards. They have a top speed of 70 km/h and room for 309 passengers with seating for 80. Four additional trams of the same design were ordered in November 2015 to service the second stage. Delivery of these trams is due to begin in August 2017. 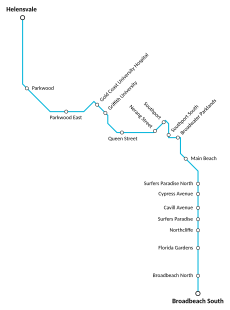 Services are operated by Keolis Downer, a joint venture between Keolis and Downer Rail. Keolis Downer has operated Yarra Trams in Melbourne since November 2009. It is claimed that the system can move up to 10,000 people an hour. Fares are set by TransLink with all stations fitted with go card readers.

On Monday to Friday mornings (midnight to 5am), the light rail is replaced by Surfside Buslines route 700.

The following table lists patronage figures for the network (in millions of journeys) during the corresponding financial year. Australia's financial years start on 1 July and end on 30 June. Major events that affected the number of journeys made or how patronage is measured are included as notes. 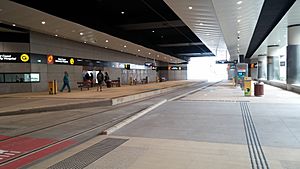 Gold Coast University Hospital, the northern terminus and the only underground station in the system.
Main page: List of G:link stations

The line opened with sixteen initial stations. Seven stations are located in Southport, one is in Main Beach, six are in Surfers Paradise, and two are in Broadbeach. TransLink charges fares that increase as passengers travel through eight concentric zones radiating outward from the Brisbane central business district; All stations are located within zone 5. Fifteen of the stations are street-level open-air structures featuring passenger canopies, and one is underground. Ten stations have side platforms and six have an island platform. It takes 33 minutes to travel from one end of the line to the other. Eight of the stations have kiosks, six stations offer transfers to TransLink bus services and none have park and ride lots. Gold Coast University Hospital is the northern terminus of the system, while Broadbeach South is the southern terminus. The most heavily trafficked station is Cavill Avenue, with an average 4,729 daily passengers in February 2016.

Three new stations are planned. Two will be located in Parkwood and one will be in Helensvale. The northern terminus of the system will become a stop at Helensvale railway station that will offer transfers to TransLink bus services and to the Gold Coast railway line. All of the new stations will be at street-level. One new station will have side platforms and two will have an island platform. The new extension will add 11 minutes to the total travel time. Two of the new stations will have free park and ride lots with a total of 1,400 new parking spaces.

All content from Kiddle encyclopedia articles (including the article images and facts) can be freely used under Attribution-ShareAlike license, unless stated otherwise. Cite this article:
G:link Facts for Kids. Kiddle Encyclopedia.