Nerang is a suburb on the Gold Coast in Queensland, Australia, that lies upon the Nerang River. At the 2011 Census, Nerang had a population of 16,256.

Nerang, like Mudgeeraba, is the very remnant of those townships that characterise the rural hinterland of the Gold Coast. Together with Advancetown and Tallebudgera its settlement was brought together with the construction of the Gold Coast railway in the later years of the 19th century. It was not until the 20th century that the coastal lands became dominant. Subdivision was conventional and buildings were traditional rural or rural commercial. 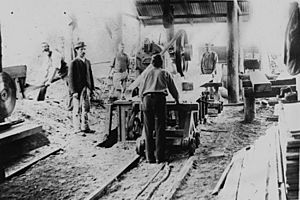 A town survey was conducted in 1865. Nerang has focused very much on the river crossing and the head of navigation. Land was first sold here in 1871. Daily Cobb & Co coach services from Brisbane began the same year and river transport to the settlement became more regular. With an abundant supply of red cedar amongst other tree species, the first industry to flourish in the area was timber cutting. In 1875, Nerang State School opened.

Sugar and maize were grown by farmers along the upper reaches of the river. The arrival of the railway in 1887 gave added impetus to the town. In 1927, a timber building was the first built specifically for use as the Council Chambers. During World War II the Australian Army's 4th Armoured Brigade operated a tank training centre at Nerang.

The Shire of Nerang became part of the Shire of Albert in 1950 and the Chambers became a post office. Recent years have seen the early Nerang flourish as an administrative centre for the growing Gold Coast.

The construction of the 'new' Pacific Highway on the old railway reserve has helped to focus development in the town in a manner which has extended and indeed largely swamped the early township. Its character is however still dependent upon the river and the early subdivision and commercial centre survives.

The South Coast railway opened in 1889 with a station at Nerang. The railway and the station closed in 1964. The Pacific Motorway follows the route of the original railway. The new Gold Coast railway line was opened progressively from 1996 with the current Nerang railway station on a different site.

A number of well-known sporting teams represent the local area, including the Nerang Roosters is the local rugby league club and Nerang Bulls RUC are the local Rugby Union club who play home games at Robert Dalley Park.

All content from Kiddle encyclopedia articles (including the article images and facts) can be freely used under Attribution-ShareAlike license, unless stated otherwise. Cite this article:
Nerang, Queensland Facts for Kids. Kiddle Encyclopedia.