Surfers Paradise is a suburb within the local government area of City of Gold Coast in Queensland, Australia. At the 2011 census, Surfers Paradise had a population of 19,668. Colloquially known as 'Surfers', the suburb has many high-rise apartment buildings and a wide surf beach. The feature of the heart of the suburb is Cavill Mall, which runs through the shopping and entertainment precinct. Cavill Avenue, named after Jim Cavill, an early hotel owner, is one of the busiest shopping strips in Queensland, and the centre of activity for night life. One of the features of the area is the Surfers Paradise Meter Maids designed to build goodwill with tourists.

Surfers Paradise is the Gold Coast's entertainment and tourism centre and the suburbs high-rise buildings are the best known feature of the city's skyline. 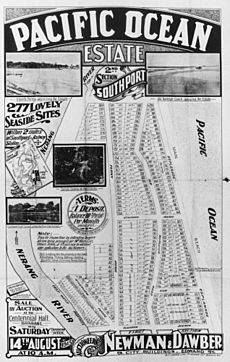 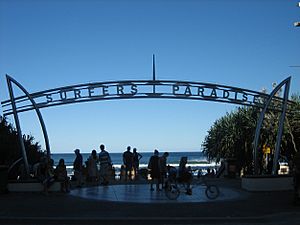 Main entrance to the beach 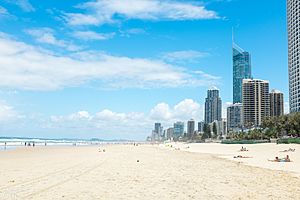 James Beattie, a farmer, became the first European to settle in the area when he staked out an 80-acre (32 ha) farm on the northern bank of the Nerang River, close to present-day Cavill Avenue. The farm proved unsuccessful and was sold in 1877 to German immigrant Johan Meyer, who turned the land into a sugar farm and mill. Meyer also had little luck growing in the sandy soil and within a decade had auctioned the farm and started a ferry service and built the Main Beach hotel. By 1889, Meyer's hotel had become a post receiving office and subdivisions surrounding it were named Elston, named by the Southport postmaster after his wife's home in Southport, Lancashire, England. The Main Beach Hotel licence lapsed after Meyer's death in 1901 and for 16 years Elston was a tourist town without a hotel or post office.

In 1917, a land auction was held by Brisbane real estate company Arthur Blackwood to sell subdivided blocks in Elston as the 'Surfers' Paradise Estate', but the auction failed because access was difficult. This was the first recorded reference to Surfers Paradise, but like the Gold Coast, the title may already have been local vernacular – surfing having been demonstrated in Sydney in 1915.

Elston began to get more visitors after the opening of Jubilee Bridge and the extension of the South Coast Road in 1925; the area was serviced before then only by Meyer's Ferry at the Nerang River. Elston was no longer cut off by the river and speculators began buying land around Elston and Burleigh Heads. Estates down the coast were promoted and hotels opened to accommodate tourists and investors.

In 1925, Brisbane hotelier Jim Cavill opened the Surfers Paradise Hotel located on what would later become the site of the Surfers Paradise Centre which incorporates the Surfers Paradise Beer Garden and Hard Rock Cafe. In opening the hotel and neighbouring zoo, Cavill created the first attraction in the suburb. Located between the ferry jetty and the white surf beach off the South Coast Road, it became popular and shops and services sprang up around it. In the following years Cavill pushed to have the name Elston changed to Surfers' Paradise. The suburb was officially renamed on 1 December 1933 after the local council felt the Surfers Paradise name was more marketable. In July 1936 Cavill's timber hotel burnt to the ground and was rebuilt the following year.

A development boom followed in the 1950s and 1960s. The first highrise in Surfers Paradise was erected in 1959 and was named the Kinkabool. The Kinkabool stood 10-stories high and remains to this day in Hanlan Street. Many tall apartment buildings were constructed in the decades that followed, including the iconic buildings included the Iluka, St Tropez and The Pink Poodle. The boom later saw strong Japanese investment in the 1980s.

Little remains of the early vegetation or natural features of the area and even the historical association of the beachfront development with the river is tenuous. The early subdivision pattern remains, although later reclamation of the islands in the Nerang River as housing estates (e.g. Chevron Island), and the bridges to those islands, have created a contrast reflected in subdivision and building form. Some early remnants survived such as Budd's Beach — a low-scale open area on the river which even in the early history of the area was a centre for boating, fishing and swimming.

Some minor changes have occurred in extending the road along the beachfront since the early subdivision and The Esplanade road is now a focus of activity, with supporting shops and restaurants. The intensity of activity, centred on Cavill, Orchid and Elkhorn Avenues, is reflected in the density of development. Of all places on the Gold Coast the buildings in this area constitute a dominant and enduring image visible from as far south as Coolangatta and from the mountain resorts of the hinterland.

Surfers Paradise has a number of heritage-listed buildings, including:

Surfers Paradise is fronted to the east by the Surfers Paradise Foreshore, a rejuvenated public space that fronts Surfers Paradise Beach and the Pacific Ocean. The Foreshore was completed in 2011 and feature contemporary coastal streetscaping that incorporates existing trees and vegetation, including about 95 pandanus trees. The masterplanned space hosts a full calendar of free public events such as the Surfers Paradise Festival and the Australian Sand Sculpting Championships. The area of Surfers Paradise east of Surfers Paradise Boulevard sprawling towards the beach tends to focus on family-friendly attractions such as Time Zone, Ripley's Believe it or Not museum and Adrenalin Park; while the nightclubs and adult entertainment tend to be concentrated in the western part of the suburb.

To the East it is bordered by Esplanade along the Ocean. The Westward inland side is defined by the canal system and the Gold Coast Highway. 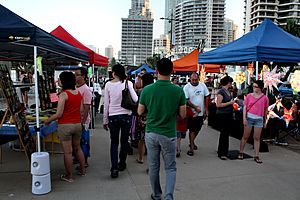 The "Gold Coast Nightlife Precinct" offers many after-dark activities for visitors. The precinct is considered Australia's nightlife capital and attracts close to 20,000 visitors daily. The area also hosts the largest Schoolies week event in the country, attracting tens of thousands of school leavers to the precinct. They always have people protecting the school leavers. 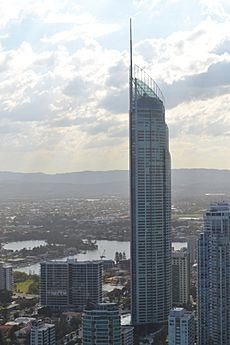 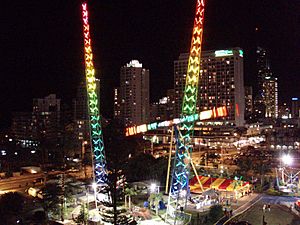 Adrenalin Park is a small amusement park in Surfers Paradise operated by Funtime. The park features the Sling Shot and Vomatron rides as well as a mini golf course.

The Surfers Paradise Meter Maids were introduced in 1965 when entrepreneur Bernie Elsey opposed the installation of parking meters in Surfers Paradise. The maids were hired to top up expired parking meters and dressed in gold bikinis. Meter feeding is against the law but council decided to ignore the offence due to the good publicity it garnered. Gold Coast Mayor Bruce Small promoted the city in 1967 through the use of the bikini-clad meters maids. The evolution of parking meters has rendered the meter maids initial goal useless and are seen as a novelty these days.

The meter maids initially dressed in gold lamé bikinis and a tiara but the outfit would go through several changes during their existence. The attire has now evolved into a gold lycra bikini and an Akubra hat. A sash is often worn emblazoned "Surfers Paradise Meter Maids". Controversial retired Australian rules football player Warwick Capper underwent a short stint as a Surfers Paradise meter maid in 2007.

Staged each March and April, the annual Surfers Paradise Festival is a celebration of local music, food, fashion, film and art and is a key driver of the Gold Coast's long-term cultural development. Across the four weekends of the festival, the Surfers Paradise precinct is transformed into a vibrant showcase of the Gold Coast's emerging arts and cultural scene. The festival comprises an accessible mix of family events, exhibitions, live music, street markets and short film screenings. 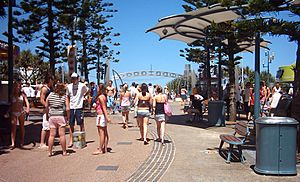 Schoolies week is an Australian tradition of high-school graduates (also known as "schoolies" or "leavers") having week-long holidays following the end of their final exams in late November and early December. The tradition began on the Gold Coast, particularly Surfers Paradise, in 1979, and Surfers Paradise is still the largest single venue for the event. Official Schoolies events on the Gold Coast are drug-free and alcohol-free events held on the beach. The events often include concerts and parties.

The event is often seen as a rite of passage for graduating students and a transitional period from youth to adulthood. The event also attracts over age and under age attendees that are referred to as toolies and foolies. It is estimated that around 40,000 teenagers travel to the Gold Coast for the Schoolies event every year. A dedicated Schoolies event zone, featuring live music and youth-themed activities, is established each year on Surfers Paradise Beach in order to provide a safe, fun environment for school leavers. The area is monitored for exclusive use of current Year 12 school leavers. Schoolies Hub Beach area opens nightly from 7pm.

Volunteers in bright orange vests are the Schoolies Support Team who provide practical support and advice. Recharge Zones are located close to the Schoolies Hub to provide a safe place to keep hydrated with free water available.

Surfers Paradise Beach is regarded as one of the best beaches on the east coast of Australia and has been recognised with numerous domestic and international awards:

The precinct is serviced by two modes of public transport which are Surfside Buslines and the G:Link light rail service. Surfside Buslines operates serval bus routes which connect the suburb with the western parts of the city. The G:link runs in a north-south direction. 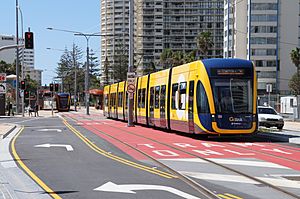 The G:Link light rail system has five stations through the precinct.

As an iconic holiday destination, Surfers Paradise has been namechecked in numerous popular Australian songs including:

The place is part of the open world environment of the 2016 racing video game Forza Horizon 3.

All content from Kiddle encyclopedia articles (including the article images and facts) can be freely used under Attribution-ShareAlike license, unless stated otherwise. Cite this article:
Surfers Paradise, Queensland Facts for Kids. Kiddle Encyclopedia.