Benowa is a suburb in the City of Gold Coast, Queensland, Australia. In the 2016 census Benowa had a population of 8,741 people. 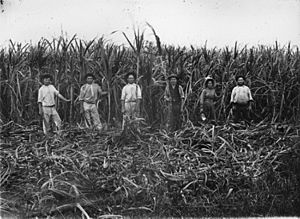 Canecutters working in the cane fields in the Benowa area, ca. 1910

The name was originally derived from the Bundjalung word "Boonow", meaning bloodwood tree. This word was later corrupted by European settlers in search of sugar cane growing on the shores of the Nerang River. The name was perpetualised in 1870 when a pioneer named Robert Muir used the name for his sugar plantation on the northern bank of the river.

The Bundall Provisional School opened on 21 September 1885 on the corner of Ashmore Road and Mediterranean Drive under head teacher Edwin Davies. In November 1900 it was renamed Benowa Provisional School. On 1 January 1909, it was relocated the corner of Ashmore Road and Carrara St and became Benowa State School. In 1965 it was relocated to its present site at Benowa Road.

There are 3 distinct areas to Benowa. Established Benowa located on the northern side of Ashmore Road, Benowa Hills and Benowa Waters. Benowa is attracting a fair amount of attention from renovators with some of the original homes being built around the 1980s, due to its great proximity to Surfers Paradise, and Broadbeach and with so many great facilities within the area. Benowa is renowned for its canals with easy access to the Nerang River.

The median age of the Benowa population was 43 years, 5 years above the national median of 38.

The Royal Pines Resort is home to professional Golf tournaments such as the Australian PGA Championship and the Australian Ladies Masters. The resort also used to host a professional Tennis event named the Mondial Australian Women's Hardcourts on the WTA Tour. The event was moved to Brisbane in 2009. The Tennis facilities are still used by the Australian Fed Cup team to host Fed Cup ties and Bernard Tomic often trains on the courts in the off season.

All content from Kiddle encyclopedia articles (including the article images and facts) can be freely used under Attribution-ShareAlike license, unless stated otherwise. Cite this article:
Benowa, Queensland Facts for Kids. Kiddle Encyclopedia.