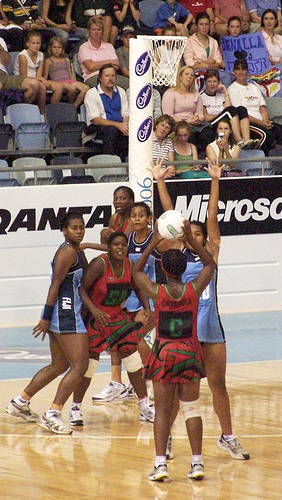 Netball in the 2006 Commonwealth Games

Netball is a sport played in two teams of seven. It is like basketball except that bouncing the ball is not allowed. The player cannot step with the ball either, nor hold it for more than three seconds. The game proceeds by players throwing (passing) the ball to each other until one attempts to throw it through the hoop, known as a "shot". There are 7 fixed positions on the court, which restrict the places where each player is allowed to go: 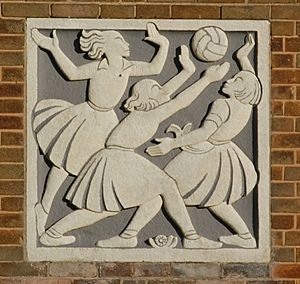 A relief carving. It is at Great Barr School. The school is in Birmingham, England. It shows girls playing netball.

There are many rules in netball some of which are:

A netball court is 30.5m long and 15.25m wide. The longer sides are called the side lines and the shorter sides the goal lines. The court is divided into three equal parts, a centre third and two goal thirds. These sections are marked by two transverse lines parallel to the goal lines. Each third measures 10.167m wide.

The goal circle is a semi‑circle 4.9m in radius and its centre is the midpoint of the goal line. The centre circle is 0.9m in diameter and is marked in the centre of the court.

All lines are part of the court and 50mm wide, preferably white. It is recommended that they are a textured, water‑based acrylic, straight and have clean, crisp edges.

All content from Kiddle encyclopedia articles (including the article images and facts) can be freely used under Attribution-ShareAlike license, unless stated otherwise. Cite this article:
Netball Facts for Kids. Kiddle Encyclopedia.