James Naismith (November 6, 1861 – November 28, 1939) was a Canadian and naturalized American sports coach and innovator. Naismith invented the sport of basketball in 1891. He is also said to have introduced the first football helmet.

Dr. Naismith was born in 1861 in Ramsay Township (now Almonte, Ontario). His parents were both from Scotland.

Naismith enjoyed farm work but was not a good student. He usually spent his days outside playing catch, hide and seek, or duck on a rock. This is an old game in which a person guards a large stone against other players, who try to knock it down by throwing smaller stones at it. Naismith soon found that a soft lobbing throw was often much better than a straight hard throw in this game. This disovery was later very important when he invented basketball.

When he was nine, his parents died. Naismith lived with his grandmother and his uncle for many years.

He went to grade school at Bennies Corners near Almonte. Next, he went to Almonte High School and graduated in 1883.

In the same year, Naismith entered McGill University in Montreal. He was described as quite thin, 5 foot 10 ½ inches tall, and weighing 168 pounds. He was a talented and quick-moving athlete who played for McGill in Canadian football, soccer, and gymnastics. Naismith won many Wicksteed medals for outstanding gymnastics performances. He also played center on the football team, where he wore the first football helmet. He earned a BA in Physical Education (1888) and a Diploma at the Presbyterian College in Montreal (1890).

Beginning in 1891, Naismith taught physical education and became the first McGill director of athletics. He left Montreal to become a physical education teacher at the YMCA International Training School in Springfield, Massachusetts. 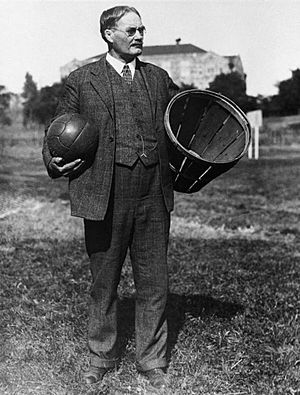 James Naismith with a basketball and a basket

At Springfield YMCA, Naismith found teaching difficult. His class was restless and irritable because they had to stay inside in the winter.

The leader of the Springfield YMCA Physical Education department told Naismith to make up a game that could be played inside which would be a good "athletic distraction." The game should not need too much room, help the athletes keep healthy, and be "fair for all players and not too rough."

Naismith was guided by three main thoughts. First, he studied the most popular games of those times (rugby, lacrosse, soccer, football, hockey, and baseball). He saw the danger of a small hard ball and decided that a big soft soccer ball was safest. Second, he saw that most physical contact happened while athletes were running with the ball, dribbling it, or hitting it. He decided that passing was the only legal option. Finally, Naismith further reduced body contact by making the goal unguardable. He did this by putting it high above the player's heads. To score goals, players were required to throw a soft lobbing shot that Naismith had used in his old favorite game duck on a rock. Naismith called this new game "Basket Ball" and wrote down the 13 basic rules. 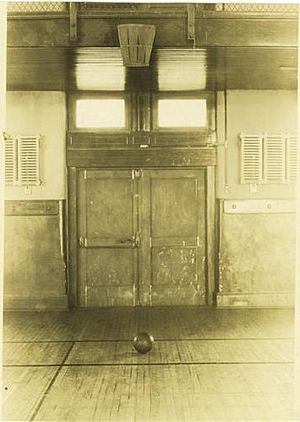 The first game of "Basket Ball" was played in December 1891. The teams had nine players and used a soccer ball. The goals were a pair of peach baskets. There are two rules that have changed in modern basketball:

By 1892, basketball had grown so popular on campus that the editor-in-chief of The Triangle, the Springfield college newspaper, featured it in an article called "A New Game."

People wanted to name the new game "Naismith Ball," but Naismith refused. By 1893, basketball was introduced in other countries by the YMCA movement.

From Springfield, Naismith went to Denver where he studied for a medical degree, and in 1898 he joined the University of Kansas faculty at Lawrence, Kansas. 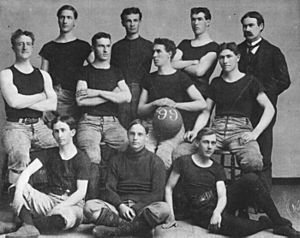 1899 University of Kansas basketball team, with Dr. James Naismith at the back, right

Six years after Naismith invented basketball, he began working at the University of Kansas as chapel director and physical education instructor. He started the men's basketball program in 1898. In these early days, most basketball games were played against nearby YMCA teams. The YMCAs across the nation played an important part in the birth of basketball.

By the turn of the century, there were enough college teams in the east of the U.S. that the first games between different colleges could be played. Basketball became a demonstration sport at the 1904 Games in St. Louis, Missouri, USA. 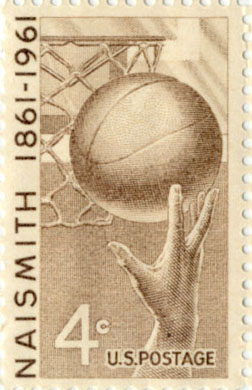 In 1935, the National Association of Basketball Coaches collected money so that the 74-year-old Naismith could witness the introduction of basketball into the official Olympic sports program of the 1936 Summer Olympic Games. During the Olympics, he was named the Honorary President of the International Basketball Federation.

Naismith became an Emeritus Professor (an emeritus is a retired college professor or minister) in Kansas and retired in 1937 at the age of 76. Including his years as coach, Naismith served as athletic director and faculty at the school for a total of almost 40 years.

Naismith was not interested in self-promotion nor in the glory of competitive sports. Instead, he was more interested in his physical education career. He received an honorary PE master's degree in 1910. For four months in 1916 during World War I, he patrolled the Mexican border. He traveled to France, published two books ("A Modern College" in 1911 and "Essence of a Healthy Life" in 1918), and became an American citizen in 1925.

On June 20, 1894, Naismith married Maude E. Sherman from Springfield. The couple had five children. Maude Naismith died in 1937, and on June 11, 1939, he married his second wife, Florence Kincaid. 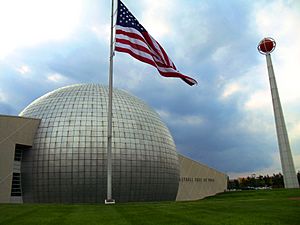 Naismith died in 1939 in his home located in Lawrence, Kansas. He was 78 years old. Naismith is buried in Memorial Park Cemetery in Lawrence, KS. After his death, his masterwork Basketball — Its Origins and Development was published in 1941. In Lawrence, Kansas, James Naismith has a road named in his honor, Naismith Drive, which runs in front of Kansas University's basketball arena. The university also named a court James Naismith Court in his honor. The Naismith Memorial Hall of Fame in Springfield, Massachusetts is also named after him. 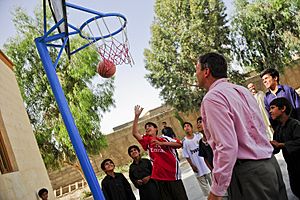 Basketball is a great game for kids

All content from Kiddle encyclopedia articles (including the article images and facts) can be freely used under Attribution-ShareAlike license, unless stated otherwise. Cite this article:
James Naismith Facts for Kids. Kiddle Encyclopedia.