Established in 1955, the organization inducted its first class of hall of famers, and opened a museum to the public that year. The museum was originally located at Exhibition Place in Toronto. In 1957, the hall of fame moved to another facility at Exhibition Place, sharing the space with the Hockey Hall of Fame. A new building to house the two hall of fames was later built at Exhibition Place in 1961. The two halls of fame continued to share facilities until 1993, when the Hockey Hall of Fame moved to a different location. Canada's Sports Hall of Fame became the building's sole occupant until it was closed in 2006 to make way for BMO Field. The organization continued to induct honourees to its hall of fame, although a new facility to house its museum was not completed until 2011. The 4,100 square metres (44,000 sq ft) facility was opened at Canada Olympic Park in Calgary, and houses the organization's offices and hall of fame museum.

As of 2019, there were 673 inductees into Canada's Sports Hall of Fame, categorized either as athletes, or as builders of the sport. Inductees are nominated by the Canadian public, though are ultimately selected by the organization's selection committee. In addition to inductions into its hall of fame, the organization has also conferred awards for accomplishments in sport, and in the larger community. 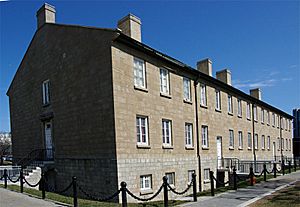 Canada's Sports Hall of Fame closed its museum to the public in 2006, with the building demolished to make way for BMO Field. The organization placed its collections in storage at Stanley Barracks, until a new facility to house the museum was completed. In 2008, the hall of fame's board of governors announced a national bid for a new permanent location for the museum. Nine cities submitted bids to host the museum, although the city of Calgary was eventually selected. Constructed at Canada Olympic Park, funding was provided by the federal government, provincial, and municipal government; in addition to private funds. The federal government contributed C$15 million to the construction budget, whereas the provincial government contributed C$10 million, and the municipal government contributing C$5 million. Canada's Sports Hall of Fame was tasked with raising an additional C$20 million to help pay operational expenses. The building opened to the public on 1 July 2011. 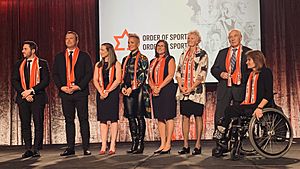 Ceremony for the inaugural members of the hall of fame's Order of Sport, October 2019

In 2019, the hall of fame introduced the People's Choice Award, to recognize an individual sport champion who also contributes to charities and local communities. The inaugural winner of the award was champion golfer and 9-time winner on the LPGA Tour, Brooke Henderson. In the same year, the organization also introduced the Order of Sport Award, which served as a physical award for being inductee to the hall of fame. 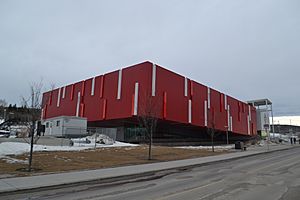 The building cantilevers 12 metres (39 ft) from the ground

Completed in 2011, Canada's Hall of Fame building was designed by Stantec, on behalf of CANA Construction, the project manager and design-lead for the museum. The exterior facade with its cantilevered structure, was designed to mimic the elevated platforms where athletes receive their medals. The building colour of red and white was taken from the colours of the flag of Canada. The structure was designed to be a sustainable building, and received LEED Silver certification. 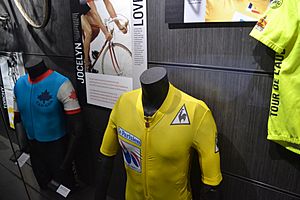 Exhibit on cycling at Canada's Sports Hall of Fame

The museum space features twelve galleries, a theatre, and interactive exhibits on the hall of fame's inductees, and Canadian sport. The museum's twelve themed galleries located on various levels, are separated by a "series of bays". The exhibits are designed to circulate around the museum's central atrium or the "Grand Hall," which houses six national trophy exhibits. The design of the museum exhibits was done by Cambridge Seven Associates.

As of November 2019, Canada's Sports Hall of Fame had over 670 inductees, categorized either as athletes or builders of the sport. Beginning with the induction of the 2019 class of hall of famers, Canada's Sports Hall of Fame began to issue the Order of Sport award to inductees, as a physical token of their induction into the hall of fame. Hall of famers that were inducted prior to 2019 were all retroactively made "peers" of the order, upon its creation.

Nominations for inductees are accepted from the Canadian public throughout the year. Athletes nominated are required to have been retired for at least four years, although builders may be nominated when they are still active in their careers. Animals and inanimate objects may be considered for induction, although their nomination requires the approval of the Hall's Board of Governors.

A new group of inductees has been introduced into Canada's Hall of Fame annually since its inception in 1955. The annual election of nominees is chosen through a selection committee of ten to 16 people.

All content from Kiddle encyclopedia articles (including the article images and facts) can be freely used under Attribution-ShareAlike license, unless stated otherwise. Cite this article:
Canada's Sports Hall of Fame Facts for Kids. Kiddle Encyclopedia.