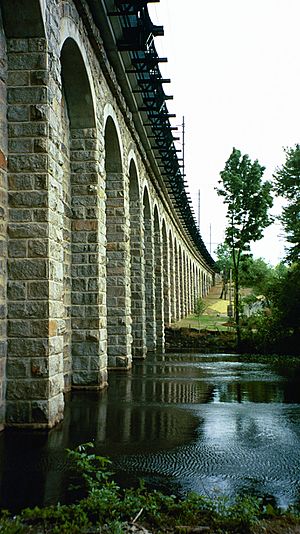 A cantilevered railroad deck and fence on the Canton Viaduct
For the figure skating element, see Cantilever (figure skating).

A cantilever is a rigid structural element, such as a beam or a plate, anchored at only one end to a (usually vertical) support from which it is protruding, this could also be a perpendicular connection to a flat vertical surface such as a wall. Cantilevers can also be constructed with trusses or slabs. When subjected to a structural load, the cantilever carries the load to the support where it is forced against by a moment and shear stress.

Cantilever construction allows for overhanging structures without external bracing, in contrast to constructions supported at both ends with loads applied between the supports, such as a simply supported beam found in a post and lintel system.

In bridges, towers, and buildings

Temporary cantilevers are often used in construction. The partially constructed structure creates a cantilever, but the completed structure does not act as a cantilever. This is very helpful when temporary supports, or falsework, cannot be used to support the structure while it is being built (e.g., over a busy roadway or river, or in a deep valley). So some truss arch bridges (see Navajo Bridge) are built from each side as cantilevers until the spans reach each other and are then jacked apart to stress them in compression before final joining. Nearly all cable-stayed bridges are built using cantilevers as this is one of their chief advantages. Many box girder bridges are built segmentally, or in short pieces. This type of construction lends itself well to balanced cantilever construction where the bridge is built in both directions from a single support.

These structures are highly based on torque and rotational equilibrium.

In an architectural application, Frank Lloyd Wright's Fallingwater used cantilevers to project large balconies. The East Stand at Elland Road Stadium in Leeds was, when completed, the largest cantilever stand in the world holding 17,000 spectators. The roof built over the stands at Old Trafford Football Ground uses a cantilever so that no supports will block views of the field. The old, now demolished Miami Stadium had a similar roof over the spectator area. The largest cantilevered roof in Europe is located at St James' Park in Newcastle-Upon-Tyne, the home stadium of Newcastle United F.C.

Less obvious examples of cantilevers are free-standing (vertical) radio towers without guy-wires, and chimneys, which resist being blown over by the wind through cantilever action at their base.

All content from Kiddle encyclopedia articles (including the article images and facts) can be freely used under Attribution-ShareAlike license, unless stated otherwise. Cite this article:
Cantilever Facts for Kids. Kiddle Encyclopedia.