Forth Rail Bridge facts for kids

For the nearby road bridge, see Forth Road Bridge. 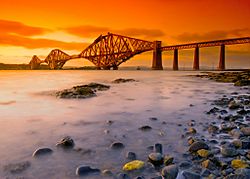 The Forth Rail Bridge is more correctly called the Forth Bridge, but the title is to distinguish it from the nearby Forth Road Bridge). It is a railway bridge across the Firth of Forth (part of the River Forth) in Scotland.

The bridge is a UNESCO World Heritage Site.

All content from Kiddle encyclopedia articles (including the article images and facts) can be freely used under Attribution-ShareAlike license, unless stated otherwise. Cite this article:
Forth Rail Bridge Facts for Kids. Kiddle Encyclopedia.