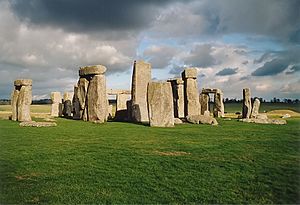 The List of World Heritage Sites in the United Kingdom is a group of places chosen by UNESCO, the United Nations Educational, Scientific and Cultural Organization.

There are 28 UNESCO World Heritage Sites in the United Kingdom and overseas territories. The UNESCO list has seventeen properties in England (the Frontiers of the Roman Empire is shared with Germany), four in Scotland, three in Wales, one in Northern Ireland, and one in each of the overseas territories of Bermuda, the Pitcairn Islands, and Saint Helena.

UNESCO was created for the "conservation and protection of the world’s inheritance of books, works of art and monuments of history and science". The constitution of UNESCO was ratified in 1946 by 26 countries, including the United Kingdom.

The UK contributes £130,000 annually to the World Heritage Fund which finances the preservation of sites in developing countries. Some locations have many sites that have a common geographical location or cultural history.

The World Heritage list has developed over time. It is part of a process; and the list continues to grow.

The first sites in the UK to be added to the World Heritage List, in 1986, were:

The latest site to be added was Pontcysyllte Aqueduct and Canal in 2009.

There are 10 criteria for a site to be able to be added to the list. World Heritage Site selection criteria i–iv are culturally based. selection criteria vii–x are natural criteria. Twenty-three properties are listed as "cultural". Four are listed as "natural". One is listed as "mixed", which means that the site is notable for both natural and cultural criteria. This is similar to the proportions of all World Heritage Sites. Of the 890 sites on the World Heritage List, 77.4% are cultural, 19.8% are natural, and 2.8% are mixed. St Kilda is the only mixed World Heritage Site in the UK. At first, it was added to the list because of its natural habitats. In 2005, the crofting community that once was part of the archipelago was added to the site. The natural sites are the Dorset and East Devon Coast, Giant's Causeway and Causeway Coast, Gough and Inaccessible Islands and Henderson Island. The rest are cultural.

As of 2012, there are 28 places in the United Kingdom which are on the World Heritage List.

There are 13 sites which are on a tentative list.

The "Tentative List" is an list of important heritage and natural sites that a country is considering adding to the World Heritage List. The Tentative List can be updated at any time. Being on the list is needed for a site to be considered to be added within a five to ten year period.

All content from Kiddle encyclopedia articles (including the article images and facts) can be freely used under Attribution-ShareAlike license, unless stated otherwise. Cite this article:
List of World Heritage Sites in the United Kingdom Facts for Kids. Kiddle Encyclopedia.