Studley Royal Park (including the Ruins of Fountains Abbey) is a UNESCO-designated World Heritage Site in North Yorkshire, England. It has an area of 323 hectares (800 acres) and features an 18th-century landscaped garden, some of the largest Cistercian ruins in Europe, a Jacobean mansion, and a Victorian church designed by William Burges.

Fountains Abbey was founded in 1132 by Benedictine monks who left St Mary's Abbey, York to follow the Cistercian order. After the end of the monasteries in 1539 by Henry VIII, the Abbey buildings and over 500 acres (200 ha) of land were sold by the Crown to a merchant named Sir Richard Gresham. The property was passed down through several generations of Sir Gresham's family. Between 1598 and 1604, it was sold to Stephen Proctor, who built Fountains Hall. 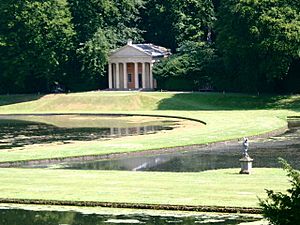 The hall is a Jacobean mansion, built partly with stone from the Abbey ruins. Fountains Abbey mill is the only 12th-century Cistercian cornmill left in the UK and the oldest 'intact' building on the estate.

From 1452 onwards, Studley Royal was inhabited by the Mallory family, most notably by MPs John Mallory and William Mallory. John Aislabie inherited the Studley estate from his elder brother in 1693. In 1966 the estate was bought by West Riding County Council and was taken over by the National Trust in 1983.

In 1986 the entire Park was designated a World Heritage Site by UNESCO. It is considered “a masterpiece of human creative genius, and an outstanding example of a type of building or architectural or technological ensemble or landscape which illustrates significant stages in human history”.

Since 1994 the estate has been within the Nidderdale Area of Outstanding Natural Beauty.

All content from Kiddle encyclopedia articles (including the article images and facts) can be freely used under Attribution-ShareAlike license, unless stated otherwise. Cite this article:
Studley Royal Park Facts for Kids. Kiddle Encyclopedia.