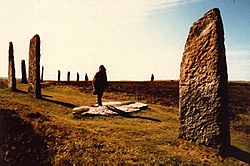 The Ring of Brodgar

Heart of Neolithic Orkney refers to a group of Neolithic monuments found on Mainland, one of the islands of Orkney, Scotland. The name was adopted by UNESCO when it proclaimed these sites as a World Heritage Site in 1999.

There are five sites on Mainland:

All content from Kiddle encyclopedia articles (including the article images and facts) can be freely used under Attribution-ShareAlike license, unless stated otherwise. Cite this article:
Heart of Neolithic Orkney Facts for Kids. Kiddle Encyclopedia.