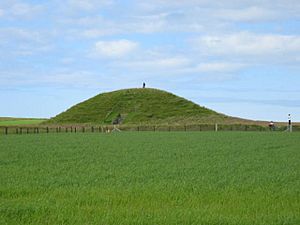 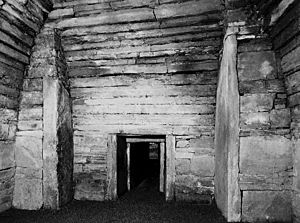 Main chamber, looking to the entrance 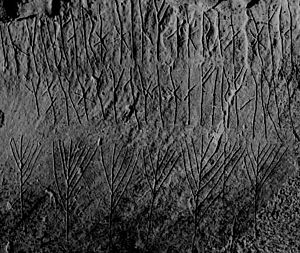 Viking carvings inside the chamber

Maeshowe, also known as Orkhaugr, a burial mound in Orkney, Scotland, with underground passage graves. It was built during the Neolithic period, about 3000 years ago. It has been included in the World Heritage Site, Heart of Neolithic Orkney.

The mound used to be taller, with a depression in the top, looking like a small volcano. It measured 11 meters in height and had a diameter of 30 meters. This was changed in 1861 when the mound was dug into by archaeologist James Farrer.

It was built on a raised level area and surrounded by a ditch and a raised bank. It may have been built on top of an earlier structure. Research shows that the ditch used to be filled with water, and there was a large stone circle around the mound. The grave itself is a long narrow entrance opening into a large chamber. There are three smaller rooms which open into the main chamber. It has been built to line up with the sun at the Winter Solstice.

Maeshowe had been dug up in the 12th century by the Vikings. It has many Norse carvings on the rocks.

All content from Kiddle encyclopedia articles (including the article images and facts) can be freely used under Attribution-ShareAlike license, unless stated otherwise. Cite this article:
Maeshowe Facts for Kids. Kiddle Encyclopedia.