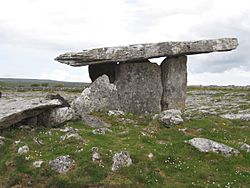 A megalithic passage tomb in the Burren in Ireland

A passage tomb or passage grave is a tomb which can be reached through a (usually low) passage. Most of these tombs were constructed during prehistoric times. Most often, large stones, called Megaliths were used to construct them. These kinds of tombs can be found in large numbers in Ireland and Scotland.

All content from Kiddle encyclopedia articles (including the article images and facts) can be freely used under Attribution-ShareAlike license, unless stated otherwise. Cite this article:
Passage tomb Facts for Kids. Kiddle Encyclopedia.