Avebury is the site of the largest ancient monument in Great Britain. It consists of a large henge, several stone circles, stone avenues and barrows. The main henge and stone circle surrounds the village of Avebury in the English county of Wiltshire.

Avebury is one of the finest and largest Neolithic monuments in Europe, about 5,000 years old. Although older than the megalithic stages of Stonehenge 32 kilometres (20 mi) to the south, the two monuments are products of the same culture.

At , Avebury is roughly midway between the towns of Marlborough and Calne, just off the main A4 road. Avebury is a Scheduled Ancient Monument, a World Heritage Site, and a National Trust property. 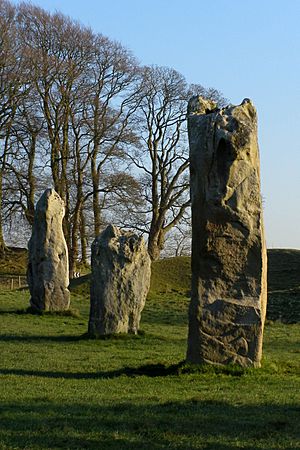 Most of the surviving structure is composed of earthworks, known as the dykes, consisting of a massive ditch and external bank henge. Although the henge is not perfectly circular, it has a diameter of about 420 metres (460 yd). The only known comparable sites of similar date are only a quarter of the size of Avebury. The ditch alone was 21 metres (69 ft) wide and 11 metres (36 ft) deep, with a sample from its primary fill carbon dated to 3300 - 2630 BC (4300+/-90).

Within the henge is a great outer circle. This is one of Europe's largest stone circles, with a diameter of 331.6 metres (1,088 ft), Britain's largest stone circle. It was either contemporary with, or built around four or five centuries after the earthworks. There were originally 98 sarsen standing stones, some weighing in excess of 40 tons. The stones varied in height from 3.6 to 4.2 m, as exemplified at the north and south entrances. The fill from two of the stoneholes has been carbon dated to between 2900 and 2600 BC (3870+/-90, 4130+/-90) 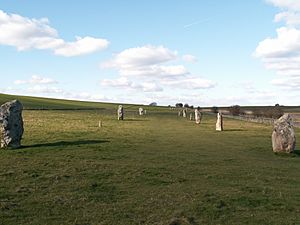 Nearer the middle of the monument are two additional, separate stone circles. The northern inner ring is 98 metres (322 ft) in diameter, but only two of its four standing stones remain upright. A cove of three stones stood in the middle, its entrance facing northeast. The southern inner ring was 108 metres (354 ft) in diameter before its destruction in the eighteenth century. The remaining sections of its arc now lie beneath the village buildings. A single large monolith, 5.5 metres (18 ft) high, stood in the centre along with an alignment of smaller stones.

The West Kennet Avenue, an avenue of paired stones, leads from the southeastern entrance of the henge; and traces of a second, the Beckhampton Avenue, lead out from the western entrance.

Findings of archaeological geophysics suggests that a timber circle of two concentric rings stood in the northeast sector of the outer circle. This has not yet been confirmed by excavation. A ploughed barrow is visible from the air in the northwestern quadrant.

The henge had four opposing entrances, two on a north by northwest and south by southeast line, and two on an east by northeast and west by southwest line.

All content from Kiddle encyclopedia articles (including the article images and facts) can be freely used under Attribution-ShareAlike license, unless stated otherwise. Cite this article:
Avebury Facts for Kids. Kiddle Encyclopedia.