Calne is a town and civil parish in Wiltshire, southwestern England, at the northwestern extremity of the North Wessex Downs hill range, a designated Area of Outstanding Natural Beauty.

In AD 978, Anglo-Saxon Calne was the site of a large two-storey building with a hall on the first floor. It was here that St Dunstan, Archbishop of Canterbury met the Witenagemot to justify his controversial organisation of the national church, which involved the secular priests being replaced by Benedictine monks and the influence of landowners over churches on their lands being taken away. According to an account written about 1000, at one point in this meeting Dunstan called upon God to support his cause, at which point the floor collapsed killing most of his opponents, whilst Dunstan and his supporters were in the part that remained standing. This was claimed as a miracle by Dunstan's supporters. 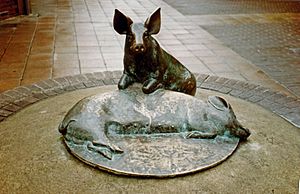 In 1086 Calne may already have been, as it was later, a market town on the main London-Bristol road. The church in it was well endowed. 74 or more households were held almost outright by burghal tenure (as citizens of a borough), and the lordship of its large outlying land was divided between the king (of whom 45 burgesses were tenants) and the church. In the Middle Ages the king's successor as the lord of Calne manor and, as owner of the church's revenues, the treasurer of Salisbury Cathedral, each had the right to hold a market and a fair in the town, with two triangular market places or fair grounds. A modest hospital was provided on a modest endowment from 1248 until it provided no accommodation in 1546 and was sold two years later by the Crown.

Calne had a significant woollen broadcloth industry in the 18th century, and evidence of this can be seen set around the triangular green by the parish church, where 24 listed buildings remain, five at Grade II* including the Tounson almshouses for the neediest poor and Georgian era clothiers' houses. Nearby are some of the 20 original cloth mills along the Marden. St Mary's church was extended by the generous donations of rich clothiers and wool merchants in the 15th century.

Houses of the 17th and 18th centuries have external walls of stone and timber-framed walls inside. Most of the stone is limestone rubble, laid with ashlar dressings in houses of higher quality; the walls of many houses were rendered smooth. Until the 19th century, quarries beside the London road northwest and southeast of the town were sources of stone for building.

A relic of 19th century lime extraction, a kiln, exists in the grounds of St Mary's School. This solid marine deposition is chiefly one chemical, calcium carbonate, and is dug in nearby pits for its main use in cement and as fertiliser on acid ground.

The Wilts & Berks Canal linked the Kennet and Avon Canal at Semington, near Melksham, to the River Thames at Abingdon. Much of the traffic on the canal was coal from the Somerset Coalfield. As the canal passed through open country near Stanley, east of Chippenham, a short branch led through three locks to a wharf in Calne. The canal was completed in 1810 and abandoned in 1914.

Calne's former railway station opened in 1863, the terminus of its own branch line of the Great Western Railway running east from Chippenham, with one intermediate stop: Stanley Bridge Halt. The opening of Black Dog Halt in the early 20th century provided insufficient demand to slow a progressive decline. The branch closed as a result of the Beeching Axe in September 1965, having suffered the ignominy of making the biggest loss per mile of any line in the country.

Subsequently, Calne's main industry other than being a small market town was the imposing Harris pork processing factory. The factory provided employment directly and indirectly to many of the residents until the early 1980s; at its closure in 1983 it employed over 2,000 people out of a town population of 10,000. It is said that the pork-curing industry developed because pigs reared in Ireland were landed at Bristol and then herded across England on drovers' roads to Smithfield, London, passing through Calne. The factory started in the second half of the 18th century when brothers John and Henry Harris started businesses which merged in 1888 as C. & T. Harris & Co. The factory has now been fully demolished and its site redeveloped as shops, housing and a library. As a result of the closure, unemployment in the town increased considerably and during much of the 1980s Calne suffered many of the economic restructuring problems more usually associated with large cities. 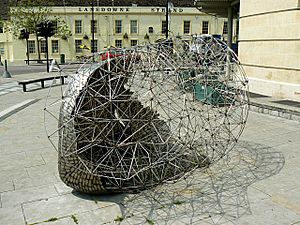 The Head, modernist sculpture in a paved square by the Lansdowne Strand

Tourism is described in nearby places of interest below, with details of the surrounding historic and landscape attractions. Within the town the annual Calne Music & Arts Festival was established in 1975.

In 2014 the town entered the South West in Bloom area of the Britain in Bloom competition and won a Gold Award for the first time. The award is judged on both the town council's floral displays and those of the community projects whose groups have entered in the 'It's Your Neighbourhood' category of the awards.

Notable buildings in the town include St Mary's Church, an array of houses on The Green and the town hall. Of particular note is Calne Library which has won awards for its innovative design and was opened by the Queen in 2001.

Since the demolition of the Harris pork factory and the completion of the first phase of redevelopment/regeneration in 2001, Calne has seen Cotswold stone, similar to local limestone, being used together with smart red brickwork, formerly reserved for fine historical buildings.

The town centre suffers traffic congestion, with the A4 through the town close to gridlock during rush hour, due to single-file traffic between Curzon Street and Wood Street, with eastbound traffic having priority. A northern bypass road (part of the A3102 road) was completed in 2001.

Calne is equidistant (12 mi or 19 km) from the M4 motorway at Junction 16 (Wootton Bassett/Swindon West) to the northeast of Calne, and the westbound M4 junction 17 just north of Chippenham to the northwest. The nearest main passenger airport is Bristol, 38 mi (61 km) to the south west. Calne has no railway or bus station, though in March 2007 it was designated as a National Express coach stop on route 403 from Bath to London via Heathrow Airport. The service runs once a day and has wheelchair-accessible coaches. Stagecoach West, Faresaver and Thamesdown Transport provide bus services to other nearby towns and cities such as Chippenham, Devizes, Marlborough, Swindon and Bath. 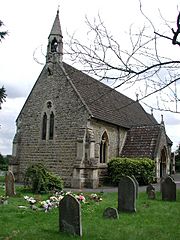 St Mary's church has a central position in the town and dates from the 12th century. The building was greatly expanded in the 14th and 15th centuries, and its tower rebuilt in the 17th. It is a Grade I listed building.

Holy Trinity church at Quemerford, on the London Road southwest of the town, was built in 1852-3. Its churchard became the parish graveyard, as St Mary's was full.

St Edmund's Catholic Church, Oxford Road, was built in 1962. The font has tiles from Stanley Abbey (which was visited by Saint Edmund Rich) and the church received stained glass from the demolished St Joseph's Church at RAF Lyneham.

Calne has a long history of Nonconformism.

A Presbyterian chapel was built in Back Road c. 1695. The congregation became Unitarian after 1770, being influenced by Joseph Priestley who lived in the town from 1773-80 and preached at the chapel. The chapel had been closed by the late 1830s and was re-used by the Primitive Methodists and later by the Salvation Army. It was demolished in the 1960s.

The Baptist church in Castle Street was built in the late 17th century, rebuilt in 1704 and again in 1817. The church continues in use. Particular Baptists built Zion chapel in 1836 on the street now called The Pippin; this too remains open, and is a feature of Calne's pedestrian precinct.

The Free Church in Church Street was built in 1868 by a group who broke away from the parish church. The congregation is affiliated to the Fellowship of Independent Evangelical Churches.

There is an Evangelical church in Oxford Road. First built in the early 1930s, and rebuilt at a later date, this was an Open Brethren Gospel Hall until at least the late 1990s.

In analysis of this subject, the town is currently two civil parishes, one wholly urban and suburban and the other wholly rural and very sparsely inhabited, forming part of the substantial green buffer to the town. These parishes are Calne and Calne Without. Until the late 19th century no such division was made: the land of Calne was determined by residents in or associated with the vestry beating the parish bounds, usually annually, see ecclesiastical parish. Calne Without is not considered here as it is covered by other hamlet settlements. Statistics from 1911-1961 are for the successor Metropolitan Borough which covered a slightly smaller area.

Notably in local radio, BBC Wiltshire and Heart Wiltshire are supplemented by community station - Eartunes. The town was served by Brunel FM, which went into liquidation. The frequency has since been taken over by Total Star.

Calne's geographic lines are grouped under the 01249 STD prefix, which includes Chippenham and Corsham, and is listed under the Bath & West Wiltshire BT Phonebook.

Nearby places of interest 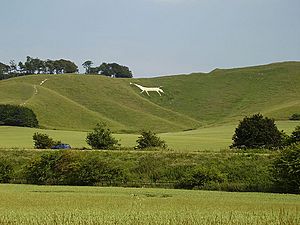 In common with the surrounding villages, hotels cater to the following attractions:

Blackland Lakes is a large camping site on the southern edge of Calne which is popular with anglers and tourists alike. The 'lakes' themselves are in fact large angling pools.

Ordnance Survey maps published in 1959-61 show Quemerford village along the A4 east of the town, a few houses at Calne Marsh along the Swindon road on the northeastern outskirts, and Lickhill Farm standing in farmland to the northwest.

Calne is twinned with the towns of :

All content from Kiddle encyclopedia articles (including the article images and facts) can be freely used under Attribution-ShareAlike license, unless stated otherwise. Cite this article:
Calne Facts for Kids. Kiddle Encyclopedia.