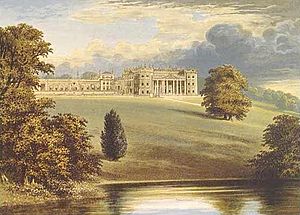 Bowood House from Morris's County Seats (1880). The block on the right is the "Big House", which has been demolished. The wing on the left, starting with the short tower, remains.

Bowood is a grade I listed Georgian country house with interiors by Robert Adam and a garden designed by Lancelot "Capability" Brown. It is adjacent to the village of Derry Hill, halfway between Calne and Chippenham in Wiltshire, England. The greater part of the house was demolished in 1956. 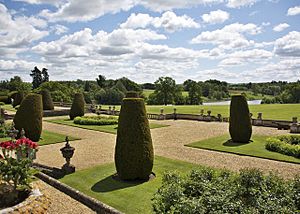 The first house at Bowood was built circa 1725 on the site of a hunting lodge, by the former tenant Sir Orlando Bridgeman, 2nd Baronet, who had purchased the property from the Crown. His grandfather Sir Orlando Bridgeman, Lord Chief Justice of the Common Pleas, had been granted the lease by Charles II. Bridgeman got into financial strife, and in 1739 under a Chancery decree, the house and park were acquired by his principal creditor Richard Long (son of Henry Long of Bayford, Herefordshire. In 1754 Long sold it to the first Earl of Shelburne, who employed architect Henry Keene to extend the house. 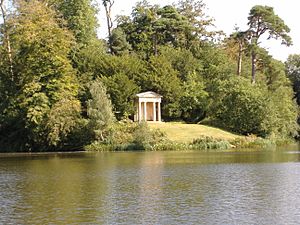 The 2nd Earl, Prime Minister from 1782 to 1783, was created Marquess of Lansdowne for negotiating peace with America after the War of Independence. He furnished Bowood and his London home, Lansdowne House, with superb collections of paintings and classical sculpture, and commissioned Robert Adam to decorate the grander rooms in Bowood and to add a magnificent orangery, as well as a small menagerie for wild animals where a leopard and an orangutan were kept in the 18th century. Adam also built for the 1st Earl in the park a fine mausoleum, which is also Grade I listed.

In the 1770s the two parts of the house at Bowood (the "Big House" and the "Little House") were joined together by the construction of an enormous drawing room.

In World War I, the 5th Marchioness set up an auxiliary Red Cross hospital in the Orangery. During World War II, the Big House was first occupied by a school, then by the Royal Air Force. Afterwards it was left empty, and by 1955 it was so dilapidated that the 8th Marquess demolished it, employing architect F. Sortain Samuels to convert the Little House into a more comfortable home. Many country houses were knocked down at this period. But before it was demolished, the Adam dining room was auctioned and bought by the Lloyd's of London insurance market, which dismantled it and re-installed it as the Committee Room in its 1958 building. The room was subsequently moved in 1986 to the 11th floor of its current building, also on Lime Street in the City of London. A portico from the house was re-erected at Roath Court, Cardiff.

The remaining house is still large, and the front wing is open to the public with rooms, paintings and sculpture on display. One of the rooms was the laboratory of Joseph Priestley, who discovered oxygen there on 1 August 1774. In the year 2000 Bowood House was designated an ACS National Historic Chemical Landmark in recognition of the importance of Priestley's discovery.

It was discovered that the lake was formed at the sacrifice of a village called Manning's Hill, which to this day remains submerged in the lake. In 2007, divers found the remains of two cottages and stone walls under the lake.

In the grounds is an adventure playground for children aged 12 and under, a large waterfall, and many gardens incorporating 2 miles or 3.2 km of Rhododendron walks in May and June, and carpets of daffodils, narcissi and bluebells in spring.

Bowood is one of Capability Brown's finest parks. Laid out over 2,000 acres (8 km²) in the 1760s, it replaced an earlier, more formal garden of avenues and wildernesses. Brown's design encompasses a sinuous lake (almost 1 km long), with lawns sloping gently down from the house, and drifts of mature trees. Submerged in the lake are foundations of cottages forming the Mannings Hill hamlet, rediscovered by divers in 2007 in shallow but heavily sedimented water.

Brown planted an arboretum of rare trees in the Pleasure Grounds behind the walled garden, and these were added to in the mid-19th century when a pinetum was begun. It was at about this time that the Doric Temple folly, originally situated by Brown in the Pleasure Grounds, was moved to its present position beside the lake.

In 1766, Lady Shelburne visited the landscape garden created by Charles Hamilton on his Surrey estate, Painshill Park. Hamilton was then asked to improve on Capability Brown's design. Working with Josiah Lane, the artisan stonemason who had built a cascade and grotto at Painshill Park, in the 1780s Hamilton added a cascade, grottoes and a hermit's cave to the lakeside.

The Italianate terrace gardens on the south front of the house were commissioned by the 3rd Marquess. The Upper Terrace, by Sir Robert Smirke, was completed in 1818, and the Lower, by George Kennedy, was added in 1851. Originally planted with hundreds of thousands of annuals in intricate designs, the parterres are now more simply planted.

In 1987 the formal garden, pleasure ground, park and woodland were listed Grade I on the Register of Historic Parks and Gardens of special historic interest in England. A golf course was laid out towards the west of the park in the late 1990s and a hotel was opened nearby on the Home Farm site in 2009.

Bowood House is the stately home of the Lansdowne family and has been the residence of: 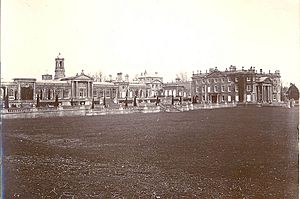 Bowood House in 1905. Today only the orangery wings on the left remain, and are Grade I listed.

All content from Kiddle encyclopedia articles (including the article images and facts) can be freely used under Attribution-ShareAlike license, unless stated otherwise. Cite this article:
Bowood House Facts for Kids. Kiddle Encyclopedia.