The AONB covers an area of some 1,730 km2 (670 sq mi). It takes the form of a horseshoe, with the open end facing east, surrounding the town of Newbury and the River Kennet catchment area. The northern arm reaches as far east as the suburbs of Reading in mid-Berkshire and as far north as Didcot in South Oxfordshire, whilst the southern arm extends to Basingstoke in northern Hampshire. To the west, the AONB reaches as far as Calne and Devizes. The highest points are the 297 m (974 ft) summit of Walbury Hill, situated southeast of Hungerford in West Berkshire (and the highest point in southern England east of the Mendip Hills), and the Milk Hill-Tan Hill plateau northeast of Devizes in central Wiltshire, at 295 m (968 ft) above sea level. 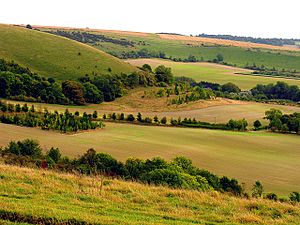 The southwestern slopes of Walbury Hill

At its northeast extreme, Lardon Chase within the North Wessex Downs AONB faces across the Goring Gap to the Chilterns AONB on the other side of the River Thames. From here working anti-clockwise around the horseshoe, the Berkshire Downs have a steep scarp slope facing north over the Vale of White Horse and a gentler dip slope facing south into the valley of the Kennet. This area includes the horse-racing village of Lambourn and is hence sometimes known as the Lambourn Downs. Beyond the town of Marlborough the downs (now called the Marlborough Downs) sweep in a semicircle to the south around the headwaters of the River Kennet, with the Vale of Pewsey cutting through these downs carrying the headwaters of the Hampshire River Avon. Here too can be found the wooded area of Savernake Forest. Finally, the highest stretch of the Downs runs east along the Berkshire-Hampshire border on the opposite side of the River Kennet from the Berkshire Downs. Again the scarp slope is to the north (facing down in the valley of the Kennet) and the dip slope is to the south into Hampshire. 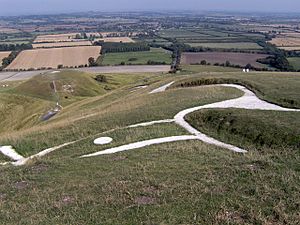 The downland is part of the Southern England Chalk Formation which runs from Dorset in the west to Kent in the east and also includes the Dorset Downs, Purbeck Hills, Cranborne Chase, Wiltshire Downs, Salisbury Plain, the Isle of Wight, Chiltern Hills and the North and South Downs.

The area is a site of scientific interest in numerous fields and has an internationally important habitat for early gentian. Geologically, its chalk downs, dry valleys and sarsen outcrops are of note, the last in the area around Marlborough providing material for many of the Neolithic and Bronze Age sites in the area such as Avebury Henge.

Horse racing forms a major industry in the area, largely because of the good quality turf that comes with the chalk underlay, and much of upland area is made over to gallops and other training areas. Several of the upland villages, and especially the large village of Lambourn, are home to major racing stables. Other villages with strong horse racing connections include Beckhampton, Kingsclere and West Ilsley. The term steeplechase originated in this area, a steeplechase originally being a race between two villages, navigated by reference to the church steeples visible across the rolling downs. 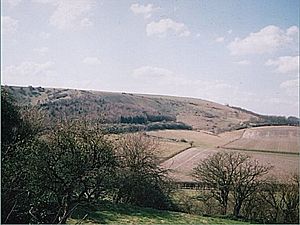 Watership Down, taken from the north-east

On the south-east arm of the AONB can be found Watership Down where the book Watership Down by Richard Adams is set, to the north of the small market town of Whitchurch, Hampshire.

Significant parts of Jude the Obscure by Thomas Hardy are set on and in the villages connected to the Berkshire Downs.

The Area of Outstanding Natural Beauty was designated in 1972. It is managed by a Council of Partners whose members are:

All content from Kiddle encyclopedia articles (including the article images and facts) can be freely used under Attribution-ShareAlike license, unless stated otherwise. Cite this article:
North Wessex Downs Facts for Kids. Kiddle Encyclopedia.