Milk Hill, located near Alton Priors east of Devizes, is the highest point in the county of Wiltshire, southwest England, at some 295 m / 968 ft above sea level (the adjacent Tan Hill rises to 294 m). It is the location of the Alton Barnes white horse (a hill figure cut in 1812).

On 23 August 2009, the BBC programme Countryfile featured an item on analysis by Ordnance Survey to determine whether Milk or Tan Hill is the higher. It was confirmed that Milk Hill is 26 centimetres (10.2 in) higher than Tan Hill. 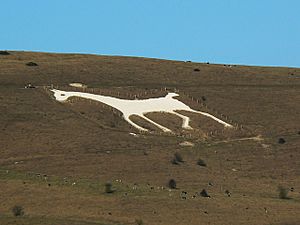 Located at the western edge of the Vale of Pewsey (part of the North Wessex Downs AONB), it is also the highest summit along a 50 km ridge extending all the way from the South Downs, across the southern Chilterns and into Wiltshire. Milk Hill is the second highest point between Bristol and London after Walbury Hill in West Berkshire (297 m / 974 ft.), and is thus also the second highest chalk hill in the UK, again behind Walbury Hill, though it has a slightly greater prominence.

Views are extensive from here, as far as the Mendips and Cotswolds and in very clear weather as far as the Black Mountains in South Wales, making this one of the most southeasterly points in the UK from which high mountain country can be sighted.

All content from Kiddle encyclopedia articles (including the article images and facts) can be freely used under Attribution-ShareAlike license, unless stated otherwise. Cite this article:
Milk Hill Facts for Kids. Kiddle Encyclopedia.