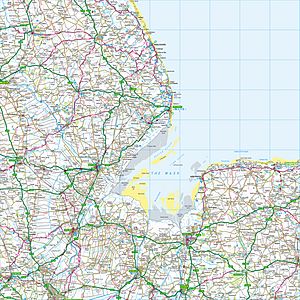 Grid square TF from the Ordnance Survey National Grid, shown at a scale of 1:250,000. The map shows the Wash and the North Sea, as well as places within the counties of Lincolnshire, Cambridgeshire and Norfolk.

The Ordnance Survey (OS) is an organisation that creates maps of Great Britain. The OS head office is in Southampton in England. They are an agency of the United Kingdom government.

All content from Kiddle encyclopedia articles (including the article images and facts) can be freely used under Attribution-ShareAlike license, unless stated otherwise. Cite this article:
Ordnance Survey Facts for Kids. Kiddle Encyclopedia.