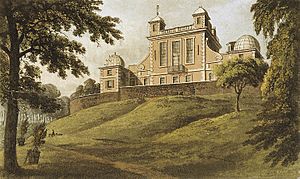 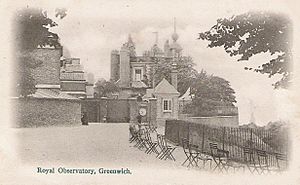 Royal Observatory, Greenwich c. 1902 as depicted on a postcard

The Royal Observatory, Greenwich (ROG; known as the Old Royal Observatory from 1957 to 1998, when the working Royal Greenwich Observatory, RGO, temporarily moved south from Greenwich to Herstmonceux) is an observatory situated on a hill in Greenwich Park in south east London, overlooking the River Thames to the north. It played a major role in the history of astronomy and navigation, and because the Prime Meridian passes through it, it gave its name to Greenwich Mean Time, the precursor to today's Coordinated Universal Time (UTC). The ROG has the IAU observatory code of 000, the first in the list. ROG, the National Maritime Museum, the Queen's House and the clipper ship Cutty Sark are collectively designated Royal Museums Greenwich.

The observatory was commissioned in 1675 by King Charles II, with the foundation stone being laid on 10 August. The site was chosen by Sir Christopher Wren, a former Savilian Professor of Astronomy; as Greenwich Park was a royal estate, no new land needed to be bought. At that time the king also created the position of Astronomer Royal, to serve as the director of the observatory and to "apply himself with the most exact care and diligence to the rectifying of the tables of the motions of the heavens, and the places of the fixed stars, so as to find out the so much desired longitude of places for the perfecting of the art of navigation." He appointed John Flamsteed as the first Astronomer Royal. The building was completed in the summer of 1676. The building was often called "Flamsteed House", in reference to its first occupant.

The scientific work of the observatory was relocated elsewhere in stages in the first half of the 20th century, and the Greenwich site is now maintained almost exclusively as a museum, although the AMAT telescope became operational for astronomical research in 2018. 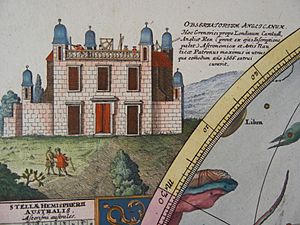 There had been significant buildings on this land since the reign of William I. Greenwich Palace, near the site of the present-day Maritime Museum, was the birthplace of Henry VIII; the Tudors used Greenwich Castle, which stood on the land that the Observatory presently occupies. Greenwich Castle was reportedly a favourite place for Henry VIII to house his mistresses, so that he could easily travel from the Palace to see them. 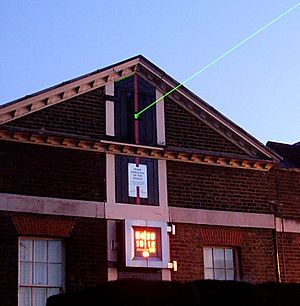 Laser projected from the observatory marking the Prime Meridian line 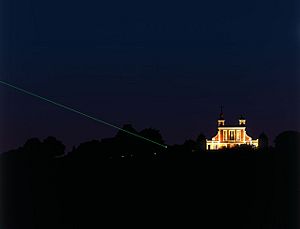 The establishment of a Royal Observatory was proposed in 1674 by Sir Jonas Moore who, in his role as Surveyor General at the Ordnance Office, persuaded King Charles II to create the observatory, with John Flamsteed installed as its director. The Ordnance Office was given responsibility for building the Observatory, with Moore providing the key instruments and equipment for the observatory at his own personal cost. Flamsteed House, the original part of the Observatory, was designed by Sir Christopher Wren, probably assisted by Robert Hooke, and was the first purpose-built scientific research facility in Britain. It was built for a cost of £520 (£20 over budget) out of largely recycled materials on the foundations of Duke Humphrey's Tower, which resulted in the alignment being 13 degrees away from true North, somewhat to Flamsteed's chagrin.

The original observatory at first housed the scientific instruments to be used by Flamsteed in his work on stellar tables, and over time also incorporated additional responsibilities such as marking the official time of day, and housing Her Majesty's Nautical Almanac Office.

Moore donated two clocks, built by Thomas Tompion, which were installed in the 20 foot high Octagon Room, the principal room of the building. They were of unusual design, each with a pendulum 13 feet (3.96 metres) in length mounted above the clock face, giving a period of four seconds and an accuracy, then unparalleled, of seven seconds per day. 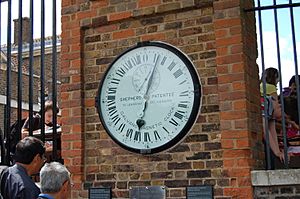 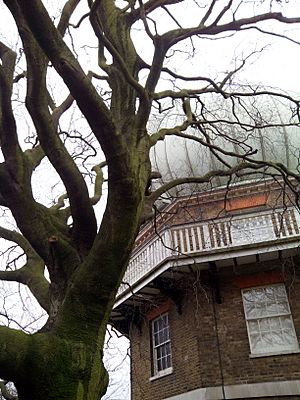 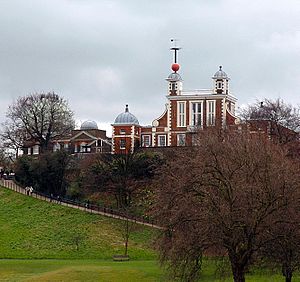 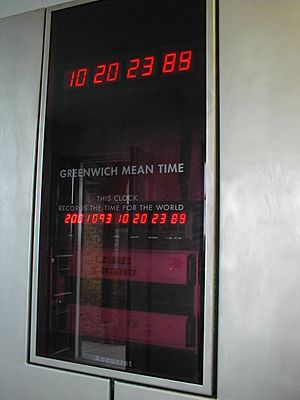 One of the hyper-accurate timekeepers at the observatory

British astronomers have long used the Royal Observatory as a basis for measurement. Four separate meridians have passed through the buildings, defined by successive instruments. The basis of longitude, the meridian that passes through the Airy transit circle, first used in 1851, was adopted as the world's Prime Meridian at the International Meridian Conference on 22 October 1884 (voting took place on 13 October). Subsequently, nations across the world used it as their standard for mapping and timekeeping. The Prime Meridian was marked by a brass strip (presently upgraded to stainless steel) in the Observatory's courtyard once the buildings became a museum in 1960, and, since 16 December 1999, has been marked by a powerful green laser shining north across the London night sky.

Since the first triangulation of Great Britain in the period 1783–1853, Ordnance Survey maps have been based on an earlier version of the Greenwich meridian, defined by the transit instrument of James Bradley. When the Airy circle (5.79 m to the east) became the reference for the meridian, the difference resulting from the change was considered small enough to be neglected. When a new triangulation was done between 1936 and 1962, scientists determined that in the Ordnance Survey system the longitude of the international Greenwich meridian was not 0° but 0°00'00.417" (about 8 m) East. Besides the change of the reference line, imperfections of the surveying system added another discrepancy to the definition of the origin, so that the Bradley line itself is now 0°00'00.12" East of the Ordnance Survey Zero Meridian (about 2.3m).

This old astronomical prime meridian has been replaced by a more precise prime meridian. When Greenwich was an active observatory, geographical coordinates were referred to a local oblate spheroid called a datum known as a geoid, whose surface closely matched local mean sea level. Several datums were in use around the world, all using different spheroids, because mean sea level undulates by as much as 100 metres worldwide. Modern geodetic reference systems, such as the World Geodetic System and the International Terrestrial Reference Frame, use a single oblate spheroid, fixed to the Earth's gravitational centre. The shift from several spheroids to one worldwide spheroid caused all geographical coordinates to shift by many metres, sometimes as much as several hundred metres. The Prime Meridian of these modern reference systems is 102.5 metres east of the Greenwich astronomical meridian represented by the stainless steel strip. Thus the strip is now 5.31 arcseconds West. The modern location of the Airy Transit is 51°28′40.1″N 0°0′5.3″W﻿ / ﻿51.477806°N 0.001472°W﻿ / 51.477806; -0.001472﻿ (Airy Transit)

Greenwich Mean Time (GMT) was until 1954 based on celestial observations made at Greenwich. Thereafter, GMT was calculated from observations made at other observatories. GMT is more properly called Universal Time at present, and is calculated from observations of extra-galactic radio sources, and then converted into several forms, including UT0 (UT at the remote observatory), UT1 (UT corrected for polar motion), and UTC (UT in discrete SI seconds within 0.9 s of UT1).

To help others synchronise their clocks to GMT, Astronomer Royal John Pond had a time ball installed atop the observatory in 1833. It still drops daily to mark the exact moment of 1 p.m. (13:00) year-round (GMT during winter and BST during summer).

What the observatory's Web site doesn't mention is that the ball contains several dents put there during renovations; the builders assumed the historic ball was to be discarded and started playing football with it.

The Observatory underwent an attempted bombing on 15 February 1894. This was possibly the first "international terrorist" incident in Britain. The bomb was accidentally detonated while being held by 26-year-old French anarchist Martial Bourdin in Greenwich Park, near the Observatory building. Bourdin died about 30 minutes later. It is not known why he chose the observatory, or whether the detonation was intended to occur elsewhere. Novelist Joseph Conrad used the incident in his novel The Secret Agent. 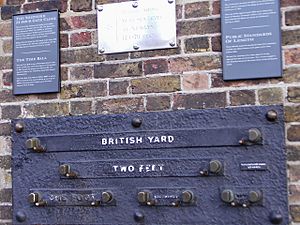 Standard lengths on the wall of the Royal Observatory, Greenwich, London – 1 yard (3 feet), 2 feet, 1 foot, 6 inches (1/2 foot), and 3 inches. The separation of the inside faces of the marks is exact at an ambient temperature of 60 °F (16 °C) and a rod of the correct measure, resting on the pins, will fit snugly between them.

During most of the twentieth century, the Royal Greenwich Observatory was not at Greenwich. The last time that all departments were there was 1924: in that year electrification of the railways affected the readings of the Magnetic and Meteorological Department and forced its move to Abinger. Indeed, prior to this, the observatory had to insist that the electric trams in the vicinity could not use an earth return for the traction current. After the onset of World War II in 1939, many departments were evacuated, along with the rest of London, to the countryside (Abinger, Bradford, and Bath) and activities in Greenwich were reduced to the bare minimum.

After the second world war, in 1947, the decision was made to move to Herstmonceux Castle and 320 adjacent acres (1.3 km²), 70 km south-southeast of Greenwich near Hailsham in East Sussex, due to light pollution in London. Although the Astronomer Royal Harold Spencer Jones moved to the castle in 1948, the scientific staff did not move until the observatory buildings were completed, in 1957. Shortly thereafter, other previously dispersed departments were reintegrated at Herstmonceux.

The Isaac Newton Telescope was built at Herstmonceux in 1967, but was moved to Roque de los Muchachos Observatory in Spain's Canary Islands in 1979. In 1990 the RGO moved again, to Cambridge. Following a decision of the Particle Physics and Astronomy Research Council, it closed in 1998. Her Majesty's Nautical Almanac Office was transferred to the Rutherford Appleton Laboratory, on the Harwell Science and Innovation Campus, Chilton, Oxfordshire after the closure. Other work went to the UK Astronomy Technology Centre in Edinburgh. The castle grounds became the home of the International Study Centre of Queen's University, Kingston, Canada and The Observatory Science Centre, which is operated by an educational charity Science Project.

At present the observatory buildings at Greenwich include a museum of astronomical and navigational tools, which is part of the National Maritime Museum, notably including John Harrison's sea watch, the H4, which received a large reward from the Board of Longitude, and his three earlier marine timekeepers, although all four are the property of the Ministry of Defence. Many additional horological artefacts are displayed, documenting the history of precision timekeeping for navigational and astronomical purposes, including the mid-20th-century Russian-made F.M. Fedchenko clock (the most accurate pendulum clock ever built in multiple copies). It also houses the astronomical instruments used to make meridian observations and the 28-inch equatorial Grubb refracting telescope of 1893, the largest of its kind in the UK. The Shepherd Clock outside the observatory gate is an early example of an electric slave clock. In February 2005 construction began on a £15 million redevelopment project to provide a new planetarium and additional display galleries and educational facilities, designed by Allies and Morrison. The 120-seat Peter Harrison Planetarium opened on 25 May 2007.

It currently possesses the IAU observatory code of 000.

All content from Kiddle encyclopedia articles (including the article images and facts) can be freely used under Attribution-ShareAlike license, unless stated otherwise. Cite this article:
Royal Observatory, Greenwich Facts for Kids. Kiddle Encyclopedia.