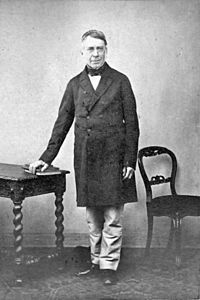 Sir George Biddell Airy (27 July 1801–2 January 1892) was an English mathematician and astronomer, Astronomer Royal from 1835 to 1881. His many achievements include work on planetary orbits, measuring the mean density of the Earth, a method of solution of two-dimensional problems in solid mechanics and, in his role as Astronomer Royal, establishing Greenwich at the location of the prime meridian. His reputation has been tarnished by allegations that, through his inaction, Britain lost the opportunity of priority in the discovery of Neptune.

All content from Kiddle encyclopedia articles (including the article images and facts) can be freely used under Attribution-ShareAlike license, unless stated otherwise. Cite this article:
George Biddell Airy Facts for Kids. Kiddle Encyclopedia.