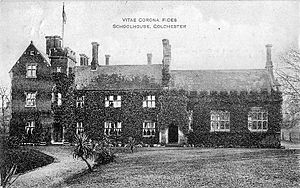 Colchester Royal Grammar School (CRGS) is a state-funded grammar school in Colchester, Essex, founded in 1206 and granted two Royal Charters by Henry VIII (in 1539) and by Elizabeth I (in 1584).

The main school buildings are located in the Lexden area of Colchester, with the school's playing fields located nearby on Queens Road / Athelstan Road. It is situated just south of Lexden Road (A1124) in the west of Colchester near Essex County Hospital. The Colchester Garrison is not far to the south.

The school has around 850 pupils aged 11–18, with girls admitted in the two upper years only. The school features extensive gardens, incorporating Gurney Benham House (named after a former Mayor of Colchester) and Elyanore House, as well as playing fields in Lexden.

The school has specialisms in science and languages. 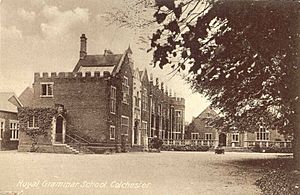 The school has achieved high results, coming first in the A-level league tables every year since the 2006 results. The school is also successful at GCSE level. In 2004, it was named as the top state school in the country by the BBC.

Headmaster Ken Jenkinson has explained this success by saying that "although as a grammar school the academic success of our students is our principal priority, I tend to see the results as the by-product of an ethos where we encourage students to aim high in all that they do and approach challenges with confidence."

The school's success was recognized by Prime Minister Tony Blair. The school's 'value added' score is higher than the national average.

Subjects studied at the school are:

Pupils in the main school wear a distinctive uniform comprising a purple blazer and tie with house badge, as well as a white shirt and black trousers and socks. Various 'custom' ties are available, recognising achievement or dedication to the school.

Students in the Sixth Form do not wear the uniform, but must instead wear smart clothes, typically a suit. The removal of the need to wear uniform in the Sixth Form happened in 1971 after a campaign by students.

Until 1908 the school blazer had been green - but the same colour was adopted by other schools in the area. Wanting the school to be recognisable, the then Headmaster (Shaw Jeffrey) approached the main local tailor and asked what the most expensive dye was. Having been told that it was purple, he decreed it to be the colour used in future.

All content from Kiddle encyclopedia articles (including the article images and facts) can be freely used under Attribution-ShareAlike license, unless stated otherwise. Cite this article:
Colchester Royal Grammar School Facts for Kids. Kiddle Encyclopedia.