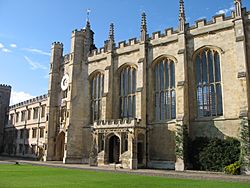 Trinity College is a college of the University of Cambridge in Cambridge, England. Trinity has more students than any other college in Cambridge or Oxford. It is also the wealthiest Oxbridge college. It owns the O2 Arena. It is one of the three royal colleges.

Of the 90 people from Cambridge who have won Nobel prizes, 32 were from Trinity College.

Famous people who have studied there include Isaac Newton (who went there in 1661) and Ludwig Wittgenstein.

The first time that the rules of association football were written down was at Trinity in 1848.

Trinity College's Wren Library is the biggest library at Cambridge. It has around 300,000 books and is open to the public.

All content from Kiddle encyclopedia articles (including the article images and facts) can be freely used under Attribution-ShareAlike license, unless stated otherwise. Cite this article:
Trinity College, Cambridge Facts for Kids. Kiddle Encyclopedia.