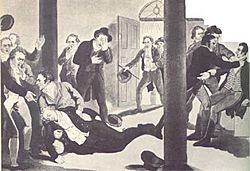 A painting depicting the assassination of Perceval. Perceval is lying on the ground while his killer John Bellingham is being caught by officials (far right)

Spencer Perceval (1 November 1762 – 11 May 1812) was a British statesman and Prime Minister. He is the only British Prime Minister to have been assassinated.

Perceval was the seventh son of John Perceval, 2nd Earl of Egmont by his second wife. His father, a close friend of Frederick, Prince of Wales and King George III, had served in the Cabinet as First Lord of the Admiralty.

The Orders in Council against trade which Perceval had written in 1807 became unpopular. In the winter of 1811 the Luddite riots started. They were also a cause of the War of 1812 with the United States of America. Perceval was forced to have an inquiry by the House of Commons.

On 11 May 1812, Perceval was on his way to attend the inquiry. In the lobby of the House of Commons he was shot through the heart by John Bellingham. Perceval's body lay in 10 Downing Street for five days before burial. Bellingham gave himself up immediately. Tried for murder, he was found guilty and hanged a week later.

Perceval was an Anglican and considered Anglicanism to be essential to the security of the state. He opposed Catholic emancipation. He is buried at St Luke's Church in Charlton, south-east London.

All content from Kiddle encyclopedia articles (including the article images and facts) can be freely used under Attribution-ShareAlike license, unless stated otherwise. Cite this article:
Spencer Perceval Facts for Kids. Kiddle Encyclopedia.