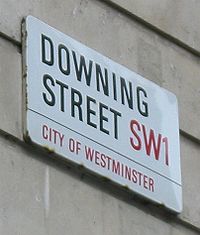 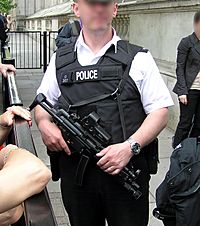 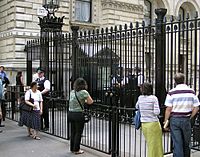 The gates at the entrance to Downing Street

Downing Street is a street in London, close to Whitehall and Buckingham Palace. The official residences of the two most senior Government ministers are here. These are the Prime Minister, and the Chancellor of the Exchequer.

Downing Street is a few minutes' walk from the Houses of Parliament. The street was built in the 1680s by Sir George Downing, 1st Baronet (1632–1689) on the site of a mansion called Hampden House. The Prime Minister, the Chancellor of the Exchequer, and the Chief Whip all have official residences in buildings along one side of the street. The houses on the other side were all replaced by the Foreign Office in the nineteenth century.

Former Prime Minister Gordon Brown and US President Barack Obama in one of the rooms.

All content from Kiddle encyclopedia articles (including the article images and facts) can be freely used under Attribution-ShareAlike license, unless stated otherwise. Cite this article:
Downing Street Facts for Kids. Kiddle Encyclopedia.