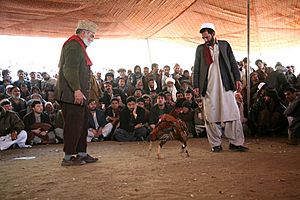 Cockfight on the outskirts of Kabul, Afghanistan

A cockfight is a sport between two or more roosters that is held inside a cockpit. The combatants, referred to as gamecocks (not to be confused with game birds), are specially bred and conditioned for increased stamina and strength. Male and female chickens of such a breed are referred to as game fowl.

Cocks possess congenital aggression toward all males of the same species. Cocks are given the best of care until near the age of two years. They are conditioned, much like professional athletes, prior to events or shows. Wagers are often made on the outcome of the match.

Cockfights are called blood sports by animal welfare and animal rights groups due to trauma inflicted between the roosters. The sport is illegal in the United States (and a felony in thirty States). In many places, cockfights and other animal fights have been outlawed, often based on opposition to gambling or animal cruelty. It has been banned outright in the United Kingdom since the 19th Century.

All content from Kiddle encyclopedia articles (including the article images and facts) can be freely used under Attribution-ShareAlike license, unless stated otherwise. Cite this article:
Cockfight Facts for Kids. Kiddle Encyclopedia.