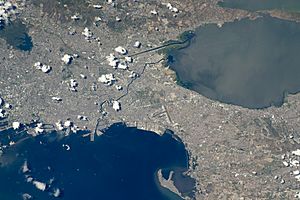 Photo of Metro Manila and surrounding provinces taken from the International Space Station, with north in the upper-left corner. May 2016.

Metropolitan Manila (Filipino: Kalakhang Maynila; Kamaynilaan), commonly known as Metro Manila, is the National Capital Region (NCR) of the Philippines. It is the seat of government. It has more people than most regions and metropolitan areas of the country.

All content from Kiddle encyclopedia articles (including the article images and facts) can be freely used under Attribution-ShareAlike license, unless stated otherwise. Cite this article:
Metro Manila Facts for Kids. Kiddle Encyclopedia.