Roxas Boulevard is one of the distinguished roads in Manila, the capital of the Philippines. It is a boulevard, or a wide road, that runs along the shores of Manila Bay. It is famous for its sunsets and stretch (or line) of coconut trees. It is now a trademark of tourism. It is also famous for its yacht club, hotels, restaurants, commercial buildings, and parks. 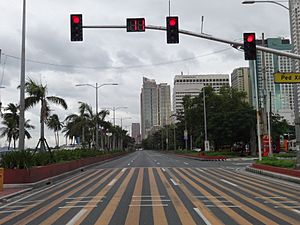 View of Roxas Boulevard from the road itself.

The old name of the road is Cavite Boulevard. It was then changed to Dewey Boulevard after the American Admiral George Dewey. Dewey's men defeated the Spanish navy in the Battle of Manila Bay in 1898.

All content from Kiddle encyclopedia articles (including the article images and facts) can be freely used under Attribution-ShareAlike license, unless stated otherwise. Cite this article:
Roxas Boulevard Facts for Kids. Kiddle Encyclopedia.