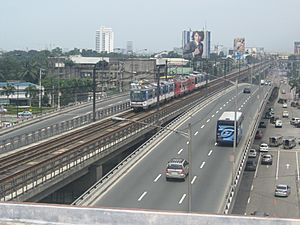 The Epifanio de los Santos Avenue, commonly abbreviated as EDSA, is a freeway in the Philippines. The avenue serves the National Capital Region, or the Metropolitan Manila, passing through 6 of the 17 settlements in the region, namely, the cities of Caloocan, Quezon City, Mandaluyong, San Juan City, Makati and Pasay. It is the longest highway in the area that measures about 23.8 kilometres (14.8 mi).

All content from Kiddle encyclopedia articles (including the article images and facts) can be freely used under Attribution-ShareAlike license, unless stated otherwise. Cite this article:
Epifanio de los Santos Avenue Facts for Kids. Kiddle Encyclopedia.