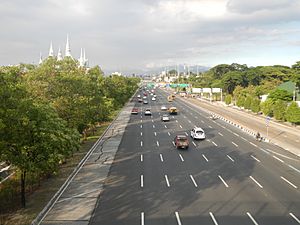 Quezon City is a highly urbanized city and the most populous city in the Philippines. It was founded by and named after Manuel L. Quezon, the 2nd President of the Philippines, to replace Manila as the national capital. The city was proclaimed as such in 1948, though a significant number of government buildings have remained in Manila. Quezon City held status as the official capital until 1976 when a presidential decree was issued to reinstate and designate Manila as the capital and Metro Manila as the seat of government.

It is the largest city in terms of population and land area in Metro Manila, the National Capital Region of the Philippines. Quezon City is not located in and should not be confused with Quezon Province, which was also named after the president.

Also located in Quezon City is the Quezon Memorial Circle, a national park. The park is an ellipse bounded by Elliptical Road. Its main feature is the Quezon Memorial Shrine, a 66-meter-tall mausoleum containing the remains of President Quezon and his wife, First Lady Aurora Quezon. The shrine is considered Quezon City's foremost landmark and is depicted in its city seal.

All content from Kiddle encyclopedia articles (including the article images and facts) can be freely used under Attribution-ShareAlike license, unless stated otherwise. Cite this article:
Quezon City Facts for Kids. Kiddle Encyclopedia.