Fort Walton Beach is a year-round fishing and beach resort community. Its busiest time of the year is the summer, causing a boost to the local economy because of seasonal human migration.

Prehistoric settlement of Fort Walton Beach is attributed to the mound building "Fort Walton Culture" that flourished from approximately 1100~1550 AD. It is believed that this culture evolved out of the Weeden Island culture. Fort also appeared to come about due to contact with the major Mississippian centers to the north and west. It was the most complex in the north-west Florida region. The Fort Walton peoples put into practice mound building and intensive agriculture, made pottery in a variety of vessel shapes, and had hierarchical settlement patterns that reflected other Mississippian societies.

The first Europeans to set foot in what is now Okaloosa County and the Fort Walton Beach area were members of Álvar Núñez Cabeza de Vaca's party, who traveled by boat from what is now Panama City Beach, Florida in 1528 to Texas, "Then we set out to sea again, coasting towards the River of Palms. Every day our thirst and hunger increased because our supplies were giving out, as well as the water supply, for the pouches we had made from the legs of our horses soon became rotten and useless. From time to time we would enter some inlet or cove that reached very far inland, but we found them all shallow and dangerous, and so we navigated through them for thirty days, meeting sometimes Indians who fished and were poor and wretched people".

The area is described at "40 deaths a day" in a Spanish map dated 1566. In later English and French maps the area of was noted as "Baya Santa Rosa" or "Bay St. Rose". A number of Spanish artifacts, including a portion of brigantine leather armor, are housed in the Indian Temple Mound Museum.

Contrary to popular belief, there is no documentary evidence of pirates using the area as a base of operations. Piracy was rampant in the Gulf of Mexico from pirates working out of Hispaniola, the Caribbean, and the Florida Keys. Notable raids occurred in 1683 and 1687 against the Spanish fort at San Marcos de Apalachee (by French and English buccaneers), a 1712 raid against Port Dauphin (now Alabama) by English pirates from Martinique, and the actions of the late 18th-century adventurer William Augustus Bowles, who was based in Apalachicola. Bowles was never referred to as "Billy Bowlegs" in period documentation; his Creek name was "Eastajoca".

During the era of Spanish and English colonization, the area of what was to become Fort Walton Beach was noted in several journals but no worthwhile presence was established.

Early settlers of Walton County, Florida were the first to establish permanent settlements in what is now Fort Walton Beach (the area was originally named "Anderson"). One of the first settlers was John Anderson, who received land plots in 1838. The name "Anderson" is noted on maps from 1838 to 1884. It was not until 1911 that the name "Camp Walton" appeared on Florida maps.

In 1861, Camp Walton was a Confederate Army camp, a fortified post, made up of the "Walton Guards", an independent Company of Florida Volunteer Infantry from Walton County. At this time, Okaloosa County did not yet exist. Walton County received its name from Col. George Walton, who served as an aide under Andrew Jackson and whose father, George Walton Sr., was the 56th signatory of the Declaration of Independence. As a result of Col. Walton's influence in the politics of north-west Florida, his name was honored by establishing Walton County.

Camp Walton was located between the Indian Temple Mound, now known as the Heritage Park and Cultural Center, and the Santa Rosa Sound, its mission was to protect the "Narrows" from Union ships. Although the "Walton Guards" did not see much action, they did keep busy by digging up prehistoric Indian remains buried in the Indian Temple Mound and displaying them at camp. The post was abandoned in August 1862, and the "Walton Guards" were assigned to reinforce the 1st Florida Infantry Regiment, with duty in the Western Theatre.

On April 11, 1879, John Thomas Brooks purchased at a public auction in Milton, Florida, 111 acres in Section 24, Township 2, Range 24 of Santa Rosa County, a portion of the property of Henry Penny whose heirs had failed to pay the taxes on the estate. This parcel on the Santa Rosa Sound became what is now downtown Fort Walton Beach.

The United States Post Office changed the official name on their cancellations from Camp Walton to Fort Walton on 1 March 1932. 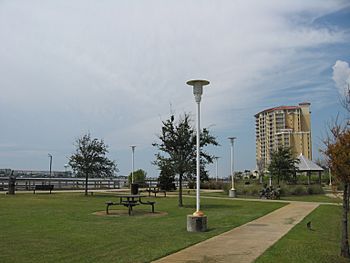 The community's name was officially changed from Fort Walton to Fort Walton Beach on June 15, 1953, by agreement with the state legislature in Tallahassee, and incorporated a portion of Santa Rosa Island formerly known as Tower Beach. Tower Beach, named for a tall observation tower at the site which was later destroyed by a hurricane, had been an amusement area operated from 1928 by the Island Amusement Company by future-Fort Walton Beach mayor Thomas E. Brooks, with a board walk, casino, restaurant, dance pavilion, "40 modernly equipped beach cottages", and concession stands which was largely destroyed by fire on Saturday, March 7, 1942. Wartime supply restrictions prevented a reconstruction. This 875-acre parcel of Santa Rosa Island with three miles of Gulf frontage was conveyed to Okaloosa County on July 8, 1950 in an informal ceremony at the county courthouse in Crestview, Florida. The county paid the federal government $4,000 to complete the transaction, the result of the efforts of Congressman Bob Sikes. The portion of Santa Rosa Island transferred is now known as Okaloosa Island. The remaining Tower Beach summer cottages were removed after the 1955 tourist season as the new Okaloosa Island Authority redeveloped the site with a new hotel and casino. The government was changed to a city manager form.

Fort Walton Beach experiences hot and very humid summers, generally from late May to mid-September. Autumns, from mid-September to early December, are generally warm. Winters are very short and mild, from mid-December to late February. Springs are warm, from late February to late May. The area recorded its highest temperature of 107 °F (42 °C) on July 15, 1980. The area recorded its lowest temperature of 4 °F (−16 °C) on January 21, 1985.

Fort Walton Beach, part of the western Choctawhatchee Bay region of which Destin and Niceville are also part, is very wet, averaging 69 inches of rain each year, more than any other city in Florida, including Pensacola. The wettest season is summer, and the driest autumn; however, the flood season is also in autumn. Snow and freezing rain are very rare. Freezing rain occurs about once every 5–10 years. Snow occurs about once every 10–15 years. The last significant snowfall was on January 31, 1977, when a depth of 4 inches was reported in inland Florida. The last report of snow was on January 28, 2014. The last report of freezing rain was on February 11, 2010. The Köppen Climate Classification subtype for this climate is "Cfa" (Humid Subtropical Climate). 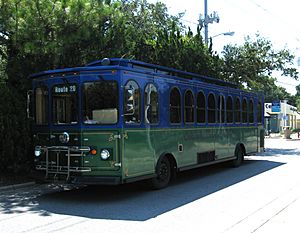 No longer Uptown station but at the Elders Center close by. Okaloosa County Transit [1] provides public transportation throughout Fort Walton Beach as well as Okaloosa County. Its main stop and transfer location is Uptown Station located on State Road 85, a little over 1 mile north of US 98.

The economy of Fort Walton Beach is driven by two primary factors: tourism and the military. There are two major Air Force bases which border Fort Walton Beach. Hurlburt Field is home to Headquarters, Air Force Special Operations Command (AFSOC), the 1st Special Operations Wing, and the Joint Special Operations University. Eglin AFB is home to the Air Force Materiel Command's Air Armament Center and the 96th Air Base Wing, the 46th Test Wing, and Air Combat Command's 33rd Fighter Wing. Eglin is geographically one of the largest Air Force bases at 724 square miles (1,880 km2), and thus home to joint exercises, and missile and bomb testing. For example, the 'Massive Ordnance Air Blast' or 'Mother of All Bombs' (MOAB) was first tested at Eglin AFB on March 11, 2003.

There is support industry in the area that benefits from the presence of the bases, including military contractors and the service industry.

The tourism industry is seasonal, with summer being the primary season, and a smaller peak season during spring break. The area also boasts a large snowbird population, which includes the Fort Walton Beach Snowbird Club. The Billy Bowlegs Pirate Festival is held annually in June.

According to Fort Walton Beach's 2010 Comprehensive Annual Financial Report, the top employers in the city were:

All content from Kiddle encyclopedia articles (including the article images and facts) can be freely used under Attribution-ShareAlike license, unless stated otherwise. Cite this article:
Fort Walton Beach, Florida Facts for Kids. Kiddle Encyclopedia.