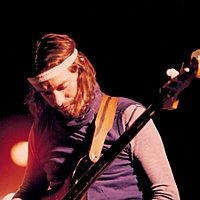 Jaco Pastorius (1951–1987) was an influential American jazz bassist, composer and big band leader. He is best known for his work with Weather Report from 1976 to 1981, as well as work with artists including Joni Mitchell, Pat Metheny, and his own solo projects.

Many professional rock, pop, country, metal, and funk, rockabilly, and bluegrass, bassists learn to play by performing in groups for many years and by taking private lessons with bass teachers.

There are fewer Bass players than traditional guitar players. Some believe the bass is harder to play, although it has fewer strings

Bassists, like other musicians, have a much lower average income than many other job categories, such as accountants or administrators. Although a tiny number of famous bassists make a large amount of money, and a small number of bassists have full-time jobs in bands or orchestras, most bassists have low incomes. Many bassists do not earn enough from playing, so they do other music-related jobs, such as teaching bass.

All content from Kiddle encyclopedia articles (including the article images and facts) can be freely used under Attribution-ShareAlike license, unless stated otherwise. Cite this article:
Bassist Facts for Kids. Kiddle Encyclopedia.