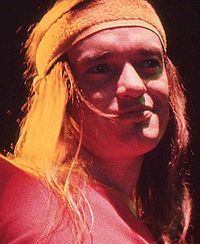 John Francis Anthony Pastorius III (December 1, 1951 – September 21, 1987), better known as Jaco Pastorius, was an American jazz bassist. Despite his short career, he is considered by a select few to be the greatest bassist of all time. He was born in Norristown, Pennsylvania.

Pastorius was a member of Weather Report from 1976 to 1981. He worked with Pat Metheny, Joni Mitchell, and recorded albums as a solo artist and band leader. Pastorius was the first bassist in any genre to use harmonics in his bass playing, which can be heard in songs such as "Portrait of Tracy".

Pastorius developed a self-destructive habit of provoking bar fights and allowing himself to be beaten up. On September 11, 1987, Pastorius was beaten to the point that he became comatose after a Carlos Santana concert in Fort Lauderdale, Florida. He suffered a cerebral hemorrhage and a few days later led to brain death. He was disconnected from life support and died on September 21, 1987 at the age of 35 at a hospital in Fort Lauderdale.

All content from Kiddle encyclopedia articles (including the article images and facts) can be freely used under Attribution-ShareAlike license, unless stated otherwise. Cite this article:
Jaco Pastorius Facts for Kids. Kiddle Encyclopedia.