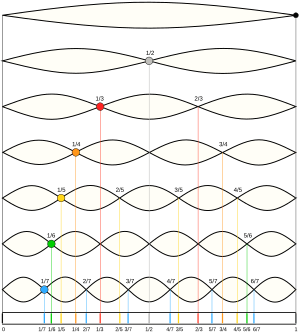 Several levels of harmonic from its fundamental frequency

Frequencies that lie between one harmonic and another harmonic are called interharmonics. For example, 1⅓f is an interharmonic between the fundamental frequency (or first harmonic) and the second harmonic. Interharmonics is a term invented, or at least standardised, by the international electronics industry about 1999, particularly for use in electrical energy. However, interharmonic frequencies also occur naturally in other radiant energies, for example music or any type of sound.

All content from Kiddle encyclopedia articles (including the article images and facts) can be freely used under Attribution-ShareAlike license, unless stated otherwise. Cite this article:
Harmonic Facts for Kids. Kiddle Encyclopedia.