Roberta Joan Mitchell, CC (née Anderson; born November 7, 1943) professionally known as Joni Mitchell, is a Canadian singer-songwriter. Drawing from folk, pop, rock, and jazz, Mitchell's songs often reflect social and environmental ideals as well as her feelings about romance, confusion, disillusionment, and joy. She has received many accolades, including nine Grammy Awards. Rolling Stone called her "one of the greatest songwriters ever", and AllMusic has stated, "When the dust settles, Joni Mitchell may stand as the most important and influential female recording artist of the late 20th century".

Mitchell was born Roberta Joan Anderson in Fort Macleod, Alberta, Canada. Her mother was a teacher while her father was a Royal Canadian Air Force flight lieutenant who instructed new pilots at RCAF Station Fort Macleod. She later moved with her parents to various bases in western Canada. After the war she settled with her family in Saskatchewan. She later sang about her small-town upbringing in several of her songs.

At school Mitchell struggled; her main interest was painting. During this time she briefly studied classical piano.

At age nine, Mitchell contracted polio in an epidemic, and was hospitalised for weeks. Following this incident she focused on her creative talent, and considered a singing or dancing career for the first time. By nine, she was a smoker; she denies claims that smoking has affected her voice. At 11, she moved with her family to the city of Saskatoon, which she considers her hometown. She responded badly to formal education, preferring a freethinking outlook. One unconventional teacher did manage to make an impact on her, stimulating her to write poetry, and her first album includes a dedication to him. In twelfth grade, she dropped out (she later picked up her studies).

At this time, country music began to eclipse rock, and Mitchell wanted to play the guitar. Eventually she taught herself guitar from a Pete Seeger songbook, but the polio had affected her fingers, and she had to devise dozens of alternative tunings of her own. This improvised approach later helped her break free of standard approaches to harmony and structure in her songwriting.

Mitchell started singing with her friends at bonfires around Waskesiu Lake, northwest of Prince Albert, Saskatchewan. Her first paid performance was on October 31, 1962, at a Saskatoon club that featured folk and jazz performers.

But art was still her chief passion at this stage, and when she finished high school at Aden Bowman Collegiate in Saskatoon, she took art classes at the Saskatoon Technical Collegiate, and then left home to attend the Alberta College of Art in Calgary for the 1963–64 school year. Here she felt disillusioned about the high priority given to technical skill over free-class creativity, and also felt out of step with the trend towards pure abstraction, and the tendency to move into commercial art. After a year, at age 20, she dropped out of school. 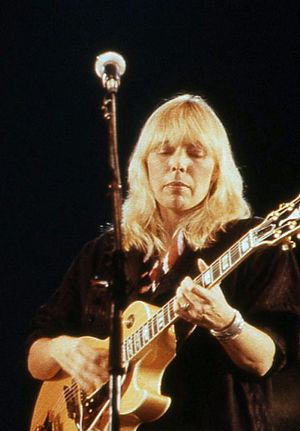 She continued to play gigs as a folk musician on weekends, at her college and at a local hotel. Around this time she took a $15-a-week job in a Calgary coffeehouse, "singing long tragic songs in a minor key". She sang at hootenannies and made appearances on some local TV and radio shows in Calgary.

In 1964, at the age of 20, she told her mother that she intended to be a folk singer in Toronto, and she left western Canada for the first time in her life, heading east for Ontario. On the three-day train ride there, Mitchell wrote her first song, "Day After Day". She stopped at the Mariposa Folk Festival to see Buffy Sainte-Marie, a Saskatchewan-born Cree folk singer who had inspired her. A year later, Mitchell too played Mariposa, her first gig for a major audience, and years later, Sainte-Marie herself covered Mitchell's work.

Mitchell began singing in small nightclubs in her hometown of Saskatoon, Saskatchewan, and throughout western Canada, before busking in the streets and nightclubs of Toronto, Ontario. In 1965, she moved to the United States and began touring. Settling in Southern California, Mitchell, with popular songs like "Big Yellow Taxi" and "Woodstock", helped define an era and a generation.

Her 1971 album Blue is often cited as one of the best albums of all time; it was rated the 30th best album ever made in Rolling Stone's list of the "500 Greatest Albums of All Time", the highest entry by a female artist. In 2000, The New York Times chose Blue as one of the 25 albums that represented "turning points and pinnacles in 20th-century popular music". In 2017, NPR ranked Blue Number 1 on a list of Greatest Albums Made By Women.

Mitchell's fifth album, For the Roses, was released in 1972. She then switched labels and began exploring more jazz-influenced melodic ideas.

Around 1975, Mitchell's vocal range began to shift from mezzo-soprano to more of a wide-ranging contralto. Her distinctive piano and open-tuned guitar compositions also grew more harmonically and rhythmically complex as she explored jazz, melding it with influences of rock and roll, R&B, classical music and non-western beats. She later turned again toward pop, embraced electronic music, and engaged in political protest.

In 2002, she was awarded a Lifetime Achievement Award at the 44th Annual Grammy Awards.

Mitchell is the sole producer credited on most of her albums, including all her work in the 1970s. A blunt critic of the music industry, she quit touring and released her 17th, and reportedly last, album of original songs in 2007. With roots in visual art, Mitchell has designed most of her own album covers. 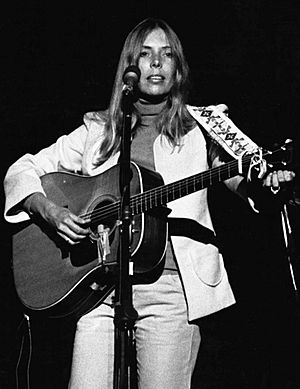 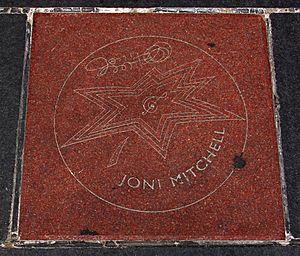 Mitchell's home country of Canada has bestowed several honours on her. She was inducted into the Canadian Music Hall of Fame in 1981 and received the Governor General's Performing Arts Award for Lifetime Artistic Achievement, Canada's highest honour in the performing arts, in 1996.

Mitchell received a star on Canada's Walk of Fame in 2000. In 2002 she became only the third popular Canadian singer-songwriter to be appointed a Companion of the Order of Canada, Canada's highest civilian honour. She received an honorary doctorate in music from McGill University in 2004. In January 2007 she was inducted into the Canadian Songwriters Hall of Fame. In June 2007 Canada Post featured Mitchell on a postage stamp.

Mitchell has received nine Grammy Awards during her career (eight competitive, one honorary), the first in 1969 and the most recent in 2016. She received a Grammy Lifetime Achievement Award in 2002, with the citation describing her as "one of the most important female recording artists of the rock era" and "a powerful influence on all artists who embrace diversity, imagination and integrity".

In 1995, Mitchell received Billboard's Century Award. In 1996, she was awarded the Polar Music Prize. In 1997, Mitchell was inducted into the Rock and Roll Hall of Fame, but did not attend the ceremony.

In tribute to Mitchell, the TNT network presented an all-star celebration at the Hammerstein Ballroom in New York City on April 6, 2000. Mitchell's songs were sung by many performers, including James Taylor, Elton John, Wynonna Judd, Bryan Adams, Cyndi Lauper, Diana Krall, and Richard Thompson. Mitchell herself ended the evening with a rendition of "Both Sides, Now" with a 70-piece orchestra. The version was featured on the soundtrack to the movie Love Actually.

In 2008, Mitchell was ranked 42nd on Rolling Stone's "100 greatest singers" list and in 2015 she was ranked ninth on their list of the 100 Greatest Songwriters of All Time.

On February 12, 2010, "Both Sides, Now" was performed at the 2010 Winter Olympics opening ceremony in Vancouver.

To celebrate Mitchell's 70th birthday, the 2013 Luminato Festival in Toronto held a set of tribute concerts entitled Joni: A Portrait in Song – A Birthday Happening Live at Massey Hall on June 18 and 19. Performers included Rufus Wainwright, Herbie Hancock, Esperanza Spalding, and rare performances by Mitchell herself.

Due to health problems she could not attend the San Francisco gala in May 2015 to receive the SFJAZZ Lifetime Achievement Award.

In 2018, Mitchell was honoured by the city of Saskatoon, when two plaques were erected to commemorate her musical beginnings in Saskatoon. One was installed by the Broadway Theatre beside the former Louis Riel Coffee House, where Mitchell played her first paid gig. A second plaque was installed at River Landing, near the Remai Modern art gallery and Persephone Theatre performing arts centre. As well, the walkway along Spadina Crescent between Second and Third Avenues was formally named the Joni Mitchell Promenade.

All content from Kiddle encyclopedia articles (including the article images and facts) can be freely used under Attribution-ShareAlike license, unless stated otherwise. Cite this article:
Joni Mitchell Facts for Kids. Kiddle Encyclopedia.