His studio albums Astral Weeks and Moondance, and the live album It's Too Late to Stop Now, are highly acclaimed.

His albums have - with few exceptions - performed well in Ireland and the UK, with more than forty hitting the UK top forty. He has scored eighteen top 40 albums in the US, twelve of them between 1997 and 2017.

He continues to record and tour, producing albums and live performances that sell well and are generally warmly received, sometimes collaborating with other artists, such as Georgie Fame and The Chieftains.

He has received two Grammy Awards, the 1994 Brit Award for Outstanding Contribution to Music, the 2017 Americana Music Lifetime Achievement Award for Songwriting and has been inducted into both the Rock and Roll Hall of Fame and the Songwriters Hall of Fame. In 2016, he was knighted for services to the music industry and to tourism in Northern Ireland. He is known by the nickname Van the Man to his fans.

His professional career began as a teenager in the late 1950s, playing a variety of instruments including guitar, harmonica, keyboards and saxophone for various Irish showbands, covering the popular hits of that time.

Van Morrison rose to prominence in the mid-1960s as the lead singer of the Northern Irish R&B and rock band, Them, with whom he recorded the garage band classic "Gloria".

His solo career began in 1967, under the pop-hit orientated guidance of Bert Berns with the release of the hit single "Brown Eyed Girl". After Berns's death, Warner Bros. Records bought out his contract and allowed him three sessions to record Astral Weeks (1968). Though this album gradually garnered high praise, it was initially a poor seller.

Moondance (1970) established Morrison as a major artist, and he built on his reputation throughout the 1970s with a series of acclaimed albums and live performances.

Much of Morrison's music is structured around the conventions of soul music and R&B. An equal part of his catalogue consists of lengthy, spiritually inspired musical journeys that show the influence of Celtic tradition, jazz and stream-of-consciousness narrative, such as the album Astral Weeks. The two strains together are sometimes referred to as "Celtic soul". 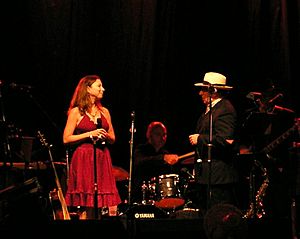 Morrison lived in Belfast from birth until 1964, when he moved to London with Them, and then three years later, he moved to New York after signing with Bang Records. Facing deportation due to visa problems, he managed to stay in the US when his American girlfriend Janet (Planet) Rigsbee, who had a son named Peter from a previous relationship, agreed to marry him. Once married, Morrison and his wife moved to Cambridge, Massachusetts, where he found work performing in local clubs. The couple had one daughter in 1970, Shana Morrison, who has become a singer-songwriter. They divorced in 1973.

All content from Kiddle encyclopedia articles (including the article images and facts) can be freely used under Attribution-ShareAlike license, unless stated otherwise. Cite this article:
Van Morrison Facts for Kids. Kiddle Encyclopedia.