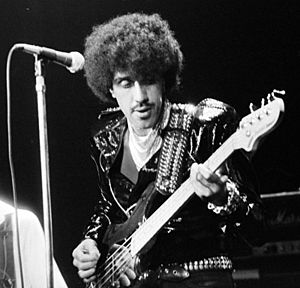 Philip Parris "Phil" Lynott (20 August 1949 – 4 January 1986) was an Irish musician. He was born in West Bromwich, Staffordshire, England and raised in Dublin, Ireland from age four. His mother was businesswoman Philomena Lynott. He was a rock bass guitarist and singer, and the leader of the rock band Thin Lizzy.

Lynott started Thin Lizzy in 1969, and they continued until 1983. He also made two solo albums in the early 1980s. They were famous for their songs "The Boys Are Back in Town", "Waiting for an Alibi", "Whisky in the Jar" and "Jailbreak". He also worked with Gary Moore.

Lynott had problems with drugs and alcohol in his final years. On 25 December 1985, he collapsed and was sent to clinic in Wiltshire, England. He was diagnosed with septicaemia. He died of pneumonia and heart failure in Salisbury, Wiltshire on 4 January 1986. He was 36.

All content from Kiddle encyclopedia articles (including the article images and facts) can be freely used under Attribution-ShareAlike license, unless stated otherwise. Cite this article:
Phil Lynott Facts for Kids. Kiddle Encyclopedia.