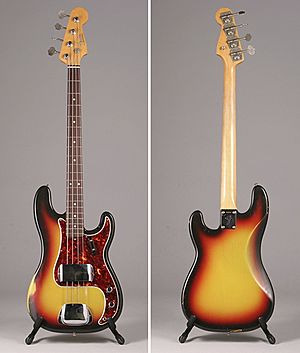 The original model of Precision Bass

The Fender Precision Bass (sometimes shortened to P-Bass) is an electric bass that has been made by Fender since 1951. It was the first popular electric bass to be made and has four strings with one split coil humbucking pickup. It was also the first bass guitar to have a solid body.

In the 1930s, Rickenbacker made an electric double bass. Then American Paul Tutmarc mad the first electric bass that could be played like a guitar, called the "Audiovox 736 Bass". This bass also had frets. Even though these were the first of this kind, they never sold very well.

Leo Fender, the founder of Fender, had the idea in the 1940s to build a solid-body bass guitar. He wanted it to be easier to play than a double bass. He also wanted it to be smaller so it was easy to move. He got this idea when talking to guitarists who didn't have jobs. They said that they could have gotten jobs being bassists, but found the double bass too hard to play.

The idea of an electric, solid body bass was new, so Fender had to make it themselves. They spoke to many bassists and guitarists to work out what design would be best. Fender had made the Telecaster guitar before and so used his designs from it to help him make the Precision. The bass was tuned the same as a double bass, EADG, with four strings. The body was a lot like the telecaster, but the top stuck out more towards the headstock so the neck wasn't too heavy to hold when playing the bass with a strap standing.

All content from Kiddle encyclopedia articles (including the article images and facts) can be freely used under Attribution-ShareAlike license, unless stated otherwise. Cite this article:
Fender Precision Bass Facts for Kids. Kiddle Encyclopedia.