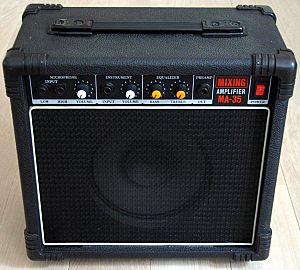 The word amplifier (sometimes called an amp) usually refers to an electronic amplifier. Electronic amplifiers make a signal from a radio or electric musical instrument (such as an electric guitar or an electric bass guitar) louder and stronger. Amplifiers are also hidden in any electronic thing that makes sound with loudspeakers. This includes televisions, radios, computers, and mp3 players, to name a few.

Amplifiers ability to use low impedance speakers may vary. Typical impedance is 8 ohms.

There is also several distortion types.

Electronic amplifiers make a signal from the radio or electric instrument louder and stronger by using transistors or vacuum tubes. Electronic amplifiers have to be connected to electrical current or a battery to work. Once the signal from the radio or electric instrument has been made louder and stronger, the signal needs to be connected to a loudspeaker so that people can hear it.

Since the 1960s, most electronic amplifiers have been built with transistors. Transistors are lighter, cheaper, and more reliable.

All content from Kiddle encyclopedia articles (including the article images and facts) can be freely used under Attribution-ShareAlike license, unless stated otherwise. Cite this article:
Amplifier Facts for Kids. Kiddle Encyclopedia.