A bass guitar in its padded case. The two knobs on the front are for controlling the volume (loudness or softness) and tone of the bass.

The bass guitar is used to play low musical sounds called "bass lines" in many styles of music such as rock, pop, country, jazz fusion and many more.

The bass guitar was first made in the 1930s by inventor Paul Tutmarc in Seattle, Washington. However, very few musicians were interested in the instrument that Tutmarc made. The need for a new instrument developed in the 1950s. At that time, the double bass was the main bass instrument used in jazz, blues, folk, early rock music and bluegrass. The problem was that the double bass was big, heavy, hard to carry around, hard to play precise notes on, and it was hard to make it louder with a bass amplifier. Musicians wanted a smaller instrument that weighed less and was easier to play and amplify. Inventors tried to think of ways of building a smaller and lighter bass instrument. One of these inventors was a man named Leo Fender in the United States. Leo Fender developed a bass guitar in the 1950s using the ideas developed by Tutmarc. 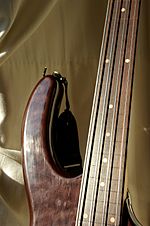 At the bottom of the body is an assembly called the bridge, a large metal assembly into which one end of the strings are fitted. On some designs, the strings are fasted through the back of the body into the bridge; on others, the strings fit into the front side of the bridge. In some basses, there is a cavity inside the back of the body that contains the electrical parts of the bass. These are usually called active basses. The bridge often has adjustments that allow the height of the strings to be changed. Other components found on the body include one or more pickups and various knobs or switches that control the sound of the bass.

The pickups are magnetic devices that sit below the strings. As the strings vibrate, an electrical signal is produced which is sent via an instrument cable to an amplifier. Pickups are either "passive", which means they send the signal with no additional amplification, or "active", which process the signal through a pre-amplifier. Some basses have pickups that can be set to passive or active mode. Basses that have two pickups (generally referred to as bridge and neck pickups) often have a switch that lets the player select neck-only, bridge-only, or a blended signal. Each pickup may have different tonal qualities that results from its placement relative to the bridge and its components.

Inside most fretboards is a long metal rod, called a trussrod, that is used to adjust the tension on the neck. The neck is slightly concave, which allows the strings to clear all frets without "buzzing." The amount of bow, along with adjustments made on the bridge, will determine the height of the strings along the fretboard.

The scale of an electric bass - the length of the strings from the nut to the bridge - is generally 34 inches (84 centimeters), although shorter and longer basses are produced. In earlier decades, short-scale basses were more common, since many designers adapted guitar parts for early models. Because in some styles of music, such as heavy metal, the strings are tuned down, longer scaled basses are sometimes favored for such styles, as string tension is higher.

Standard bass guitars have four metal strings, but models with five, six or eight strings are also made. The strings themselves are made in different ways and with different materials to change their tonal qualities.

In the 1960s and 1970s some musicians took the frets off their bass guitars. This changes the sound of the bass, particularly as the player slides their fingers along the strings. A bass guitar without frets is called a fretless bass guitar. For example Pino Palladino played a fretless bass during the 1980s. He was a session musician, playing for high profile musicians like Eric Clapton and David Gilmour. While fretless basses are often used in jazz and jazz fusion, bassists from other genres use fretless basses, such as metal bassist Steve DiGiorgio and Colin Edwin of modern/progressive rock band [Porcupine Tree].

The standard design for the electric bass guitar has four strings, generally tuned E, A, D and G (low to high). It is not uncommon for players to tune strings to a lower pitch, particularly in styles, such as heavy metal, that favor deeper sounds. Five string basses add a lower string, usually tuned to B, while six-string-basses add a higher string tuned to C. In standard tunings, each string is tuned a perfect fourth interval above the next lower string (e.g. E to A).

Sounds are produced from the strings in a number of ways. The most common form of playing is called fingerstyle, in which the player plucks the fingers upwards with the ends of the fingers. It is common to use the index and middle fingers as the plucking fingers, but players may use more fingers or even employ their thumb to pluck downwards. Other finger-based techniques include slap-and-pop, in which the player strikes the lower-pitched strings firmly with their thumb, and pulls higher-pitched strings upwards and lets them snap against the fretboard, and tapping, in which the player hammers downward with their fingertips on the fretboard.

Picks made of metal or plastic may also be used, and yield a sharper sound than plucking with fingers. Picking is sometimes combined with muting techniques to create distinctive sounds.

The bridge of the bass guitar may be fitted with a tremolo, which enables the player to vary the pitch of their strings while playing.

Where the strings are struck relative to bridge changes to the tone of the sound considerably. Plucking or picking close the bridge generally produces a more muted note, while sounding the string closer to the neck produces a fuller, more resonant tone.

All content from Kiddle encyclopedia articles (including the article images and facts) can be freely used under Attribution-ShareAlike license, unless stated otherwise. Cite this article:
Bass guitar Facts for Kids. Kiddle Encyclopedia.