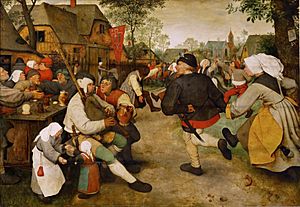 A genre (from Latin: genus) is a style or type of music, literature, movies, or other media.

Some genres (styles) are used in more than one form of art or communication. For example, the genres fantasy and science fiction are used in literature, movies, and television.

All content from Kiddle encyclopedia articles (including the article images and facts) can be freely used under Attribution-ShareAlike license, unless stated otherwise. Cite this article:
Genre Facts for Kids. Kiddle Encyclopedia.