There are many accomplished bluegrass artists including Bela Fleck, Tony Rice, Alison Krauss, Laurie Lewis, Sam Bush, Bill Monroe, and Earl Scruggs. There are many organizations devoted to this music such as the International Bluegrass Music Association (IBMA).

Many festivals are held around the country where professionals perform, amateurs gather to play, and workshops are given.

Unlike mainstream country music, bluegrass is traditionally played on acoustic stringed instruments. The fiddle, five-string banjo, guitar, mandolin, and upright bass (string bass) are often joined by the resonator guitar (also referred to as a Dobro) and (occasionally) harmonica or Jew's harp. This instrumentation originated in rural dance bands and is the basis on which the earliest bluegrass bands were formed.

The guitar is now most commonly played with a style referred to as flatpicking, unlike the style of early bluegrass guitarists such as Lester Flatt, who used a thumb pick and finger pick. Banjo players often use the three-finger picking style made popular by banjoists such as Don Reno and Earl Scruggs. Fiddlers frequently play in thirds and fifths, producing a sound that is characteristic to the bluegrass style. Bassists almost always play pizzicato, occasionally adopting the "slap-style" to accentuate the beat. A bluegrass bass line is generally a rhythmic alternation between the tonic and dominant of each chord, with occasional walking bass excursions.

Instrumentation has been an ongoing topic of debate. Traditional bluegrass performers believe the "correct" instrumentation is that used by Bill Monroe's band, the Blue Grass Boys (mandolin, fiddle, guitar, banjo and bass). Departures from the traditional instrumentation have included dobro, accordion, harmonica, piano, autoharp, drums, electric guitar, and electric versions of other common bluegrass instruments, resulting in what has been referred to as "newgrass."

Apart from specific instrumentation, a distinguishing characteristic of bluegrass is vocal harmony featuring two, three, or four parts, often with a dissonant or modal sound in the highest voice (see modal frame), a style described as the "high, lonesome sound." Commonly, the ordering and layering of vocal harmony is called the "stack". A standard stack has a baritone voice at the bottom, the lead in the middle (singing the main melody) and a tenor at the top; although stacks can be altered, especially where a female voice is included. Alison Krauss and Union Station provide a good example of a different harmony stack with a baritone and tenor with a high lead, an octave above the standard melody line, sung by the female vocalist. However, by employing variants to the standard trio vocal arrangement, they were simply following a pattern existing since the early days of the genre. The Stanley Brothers utilized a high baritone part on several of their trios recorded for Columbia records during their time with that label (1950–1953). Mandolin player Pee Wee Lambert sang the high baritone above Ralph Stanley's tenor, both parts above Carter's lead vocal. This trio vocal arrangement was variously used by other groups as well. In the 1960s Flatt and Scruggs often added a fifth part to the traditional quartet parts on gospel songs, the extra part being a high baritone (doubling the baritone part sung in the normal range of that voice; E.P. Tullock [aka Cousin Jake] providing the part). The use of a high lead with the tenor and baritone below it was most famously employed by the Osborne Brothers who first employed it during their time with MGM records in the latter half of the 1950s. This vocal arrangement would be the home aspect of the Osbornes' sound with Bobby's high, clear voice at the top of the vocal stack.

Bluegrass tunes can largely be described as narratives on the everyday lives of the people whence the music came. Aside from laments about loves lost, interpersonal tensions and unwanted changes to the region (e.g., the visible effects of mountaintop coal mining), bluegrass vocals frequently reference the hard-scrabble existence of living in Appalachia and other rural areas with modest financial resources. Some protest music has been composed in the bluegrass style, especially concerning the vicissitudes of the Appalachian coal mining industry. Railroading has also been a popular theme, with ballads such as "Wreck of the Old 97" and "Nine Pound Hammer" (from the legend of John Henry) being exemplary. 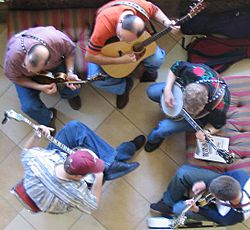 Bluegrass artists use a variety of stringed instruments.

Bluegrass, as a distinct musical form, developed from elements of old-time music and traditional music of the Appalachian region of the United States. The Appalachian region was where many English and Ulster-Scots immigrants settled, bringing with them the musical traditions of their homelands. Hence the sounds of jigs and reels, especially as played on the fiddle, were innate to the developing style. Black musicians infused characteristics of the blues to the mix, and in a development that was key to shaping the bluegrass sound, introduced the iconic banjo to the region.

The music now known as bluegrass was frequently used to accompany a rural dancing style known as buckdancing, flatfooting or clogging. As the bluegrass sound spread to urban areas, listening to it for its own sake increased, especially after the advent of audio recording. In 1948, what would come to be known as bluegrass emerged as a genre within the post-war country/western-music industry, a period of time characterized now as the golden era or wellspring of "traditional bluegrass." From its earliest days, bluegrass has been recorded and performed by professional and amateur musicians alike. Although amateur bluegrass musicians and trends such as "parking-lot picking" are too important to be ignored, it is touring musicians who have set the direction of the style. Radio stations dedicated to bluegrass have also proved influential in advancing the evolution of the style into distinctive subgenres.

All content from Kiddle encyclopedia articles (including the article images and facts) can be freely used under Attribution-ShareAlike license, unless stated otherwise. Cite this article:
Bluegrass music Facts for Kids. Kiddle Encyclopedia.