Accordions are a family of box-shaped musical instruments of the bellows-driven free-reed aerophone type, referred to as a squeezebox. A person who plays the accordion is called an accordionist.

The instrument is played by compressing or expanding the bellows while pressing buttons or keys, causing pallets to open, which allow air to flow across strips of brass or steel, called reeds. These vibrate to produce sound inside the body. The performer normally plays the melody on buttons or keys on the right-hand manual, and the accompaniment, consisting of bass and pre-set chord buttons, on the left-hand manual.

In Europe and North America, some popular music acts also make use of the instrument. Additionally, the accordion is used in cajun, zydeco, jazz music and in both solo and orchestral performances of classical music.

The piano accordion is the official city instrument of San Francisco, California. 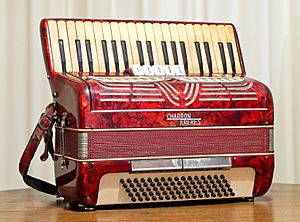 The accordion's basic form is believed to have been invented in Berlin, in 1822, by Christian Friedrich Ludwig Buschmann, although one instrument has been recently discovered that appears to have been built earlier, though according to Russian researchers, the earliest known simple accordions were made in Tula, Russia, by Timofey Vorontsov from 1820, and Ivan Sizov from 1830.

By the late 1840s, the instrument was already very widespread; together the factories of the two masters were producing 10,000 instruments a year. By 1866, over 50,000 instruments were being produced yearly by Tula and neighboring villages, and by 1874 the yearly production rate was over 700,000.

All content from Kiddle encyclopedia articles (including the article images and facts) can be freely used under Attribution-ShareAlike license, unless stated otherwise. Cite this article:
Accordion Facts for Kids. Kiddle Encyclopedia.