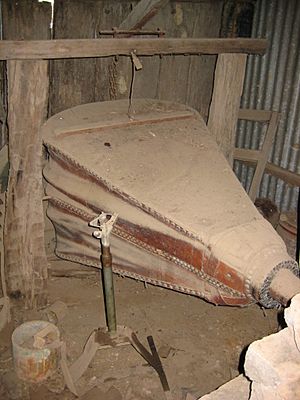 A blacksmith's bellows in Australia

A bellows is something that blows air into a small opening in order to make something work. The bellows will have a kind of sack which has air in it. When the sack is squeezed the air is pushed out. Bellows can be quite small and operated by hand, for example for stoking a fire in an open fireplace. They can also be very large, such as bellows that produce air for a large pipe organ to be played. Such bellows used to be pumped by hand (sometimes by several people), but nowadays electricity is used. Bellows are used by blacksmiths or metalworkers for smelting and welding. They are also used in small musical instruments such as bagpipes, accordions and concertinas. The harmonium has bellows which the player operates by pumping with the his feet. 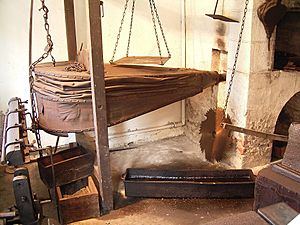 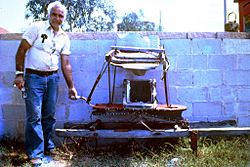 "Bellows" is only used in plural. The Old English name for 'bellows' was blǽstbęl(i)g, blást-bęl(i)g 'blast-bag, blowing-bag'; the prefix was dropped and by the eleventh century the simple bęlg, bylg, bylig ('bag') was used. The word is cognate with "belly". There are similar words in Old Norse, Swedish, and Danish, but the derivation is not certain. 'Bellows' appears not to be cognate with the apparently similar Latin follis.

Several processes, such as metallurgical iron smelting and welding, require so much heat that they could only be developed after the invention, in antiquity, of the bellows. The bellows are used to deliver additional air to the fuel, raising the rate of combustion and therefore the heat output.

Various kinds of bellows are used in metallurgy:

The Han Dynasty Chinese mechanical engineer Du Shi (d. 38) is credited with being the first to apply hydraulic power, through a waterwheel, to operate bellows in metallurgy. His invention was used to operate piston bellows of blast furnaces in order to forge cast iron. The ancient Greeks, ancient Romans, and other civilizations used bellows in bloomery furnaces producing wrought iron. Bellows are also used to send pressurized air in a controlled manner in a fired heater.

Double-acting piston bellows are a type of bellows used by blacksmiths and smelters to increase the air flow going into the forge, with the property that air is blown out on both strokes of the handle (in contrast to simpler and more common bellows that blow air when the stroke is in one direction and refill the bellows in the other direction). These bellows blow a more constant, and thus stronger, blast than simple bellows. Such bellows existed in China at least since the 5th century BC, when it was invented, and had reached Europe by the 16th century.

A piston is enclosed in a rectangular box with a handle coming out one side. The piston edges are covered with feathers, fur, or soft paper to ensure that it is airtight and lubricated. As the piston is pulled, air from one side enters and flows through the nozzle and as it is pushed air enters from the opposite side and flows through the same nozzle.

These have three leaves. The middle leave is fixed in place. The bottom leave is moved up and down. The top leave can move freely and has a weight on it. The bottom and the middle leaves contain valves, the top one does not. Only the top lung is connected to the spout.

This design does not increase the amount of air flow going into the forge, but provides a more constant air flow compared to a simple bellows. It also provides more even air flow than two simple bellows pumped alternately or one double-acting piston bellows.

The term "bellows" is used by extension for a number of accordion-like applications that are not bellows in the strict sense, in that they do not move air.

All content from Kiddle encyclopedia articles (including the article images and facts) can be freely used under Attribution-ShareAlike license, unless stated otherwise. Cite this article:
Bellows Facts for Kids. Kiddle Encyclopedia.