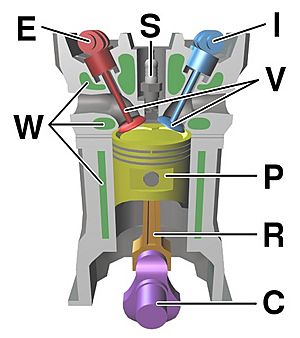 In general, a piston is a lubricated sliding shaft that fits tightly inside the opening of a cylinder. Its purpose is to change the volume enclosed by the cylinder, to exert a force on a fluid inside the cylinder, to cover and uncover ports, or some combination of these. A rubber seal is sometimes used to keep the lubricate within the shaft. Due to the constant motion of the machine this seal wears quickly and should be replaced with every servicing. If the seal should break during usage there can be disastrous long lasting consequences for the machine.

There are two ways that a piston engine can transform combustion into motive power. These are two-stroke and four-stroke.

A steam engine is another type of piston engine. In most steam engines, the pistons are double acting: steam is alternately admitted to either end of the cylinder, so that every piston stroke produces power.

All content from Kiddle encyclopedia articles (including the article images and facts) can be freely used under Attribution-ShareAlike license, unless stated otherwise. Cite this article:
Piston Facts for Kids. Kiddle Encyclopedia.