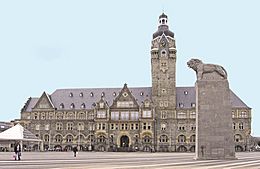 Remscheid is a city in North Rhine-Westphalia, Germany. It is, after Wuppertal and Solingen, the third largest municipality in Bergisches Land, being located on the northern edge of the region, on the south side of the Ruhr area.

Remscheid was founded in the 12th century, but remained a small village until the 19th century. Early spellings for the city included Remissgeid (1217), Rymscheyd (1351), Reymscheyd (1487) and Rembscheid (1639). The economic growth of the entire Rhine-Ruhr region led to an increase of the population of Remscheid. Mechanical engineering and toolmaking were the main industries practised within the town. This is carried on today with the Hazet tool company which has two factories in Remscheid. Remscheid was part of the Prussian Rhine Province from 1822–1945.

On 31 July 1943, during the second World War, Remscheid was almost completely destroyed during a British bombing raid which caused a firestorm. This bombing raid was the final operation of RAF's Battle of the Ruhr involving 273 aircraft. During 14 and 15 April 1945, Remscheid was captured by the 78th Infantry Division (United States).

All content from Kiddle encyclopedia articles (including the article images and facts) can be freely used under Attribution-ShareAlike license, unless stated otherwise. Cite this article:
Remscheid Facts for Kids. Kiddle Encyclopedia.