Kırşehir, formerly Mocissus, is a city in Turkey. It is the capital district of the Kırşehir Province. According to the 2000 census, the population of the district is 121,947 of which 105,826 live in the city of Kırşehir. 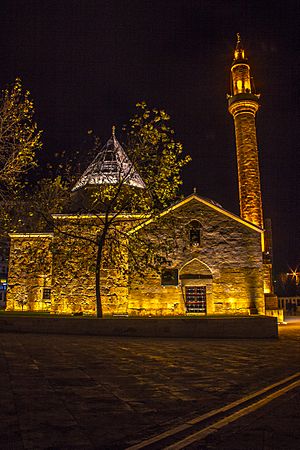 The history of Kırşehir dates back to the Hittites. During the period of the Hittites, the basin of Kırşehir was known as the country of "Ahiyuva", meaning "the Land of the Achaeans", as the Greeks were known to the Hitti. This basin also took the name Cappadocia at the time of the Romans and Byzantines.

The Turks took the city in 1071 and bestowed the current name. In Turkish, "Kır Şehri" means "steppe city" or "prairie city".

It became the chief town of a sanjak in the Ottoman vilayet of Angora, which possessed 8000 inhabitants, most of them Muslims.

In the 19th century, Kırşehir was attached to the sanjak of Ankara.

All content from Kiddle encyclopedia articles (including the article images and facts) can be freely used under Attribution-ShareAlike license, unless stated otherwise. Cite this article:
Kırşehir Facts for Kids. Kiddle Encyclopedia.