Konya is a major city in south-western edge of the Central Anatolian Plateau and is the seventh-most-populous city in Turkey with a metropolitan population of over 2.1 million. Konya is an economically and industrially developed city and the capital of Konya Province.

Lake Tuz, known in Turkish as Tuz Golu, is the second-largest lake in all of Turkey. This lake supplies Turkey with a large amount of Turkey's salt demand.

Beysehir Lake is on the western part of Konya and is near the border. It is known to be the largest fresh water lake in Turkey and one of the most important national parks. Beysehir Lake is important for tourism in Konya and attracts thousands of people each year to its 2 beaches and 22 islands for water and mountain sports.

The Konya region has been inhabited since the 3rd millennium BC. Known as Iconium during classical antiquity, the city was ruled successively by the Phrygian, Persian, Hellenistic and Roman civilizations.

In the 11th century the Seljuk Turks conquered the area from the Byzantines, and Konya then became the capital of the Sultanate of Rum. Under the Seljuks, the city reached the height of its wealth and influence. Following the demise of Rum, Konya came under the rule of the Karamanids, before being taken over by the Ottoman Empire in the 15th century. After the Turkish War of Independence the city became part of the modern Republic of Turkey. 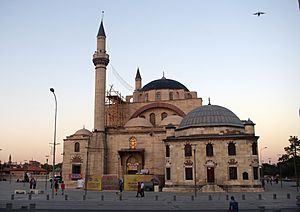 Konya was the final home of Rumi (Mevlana), whose tomb is in the city. In 1273, his followers in Konya established the Mevlevi Sufi order of Islam and became known as the Whirling Dervishes.

Konya has the reputation of being one of the more religiously conservative metropolitan centers in Turkey. It was once known as the "citadel of Islam" and its inhabitants are still comparatively more devout than those from other cities.

Konya produced Turkish carpets that were exported to Europe during the Renaissance. These expensive, richly patterned textiles were draped over tables, beds, or chests to proclaim the wealth and status of their owners, and were often included in the contemporary oil paintings as symbols of the wealth of the painter's clients.

The local cuisine of Konya includes dishes made of bulgur wheat and lamb meat. One of the renowned dishes of the city is etli ekmek, which is similar to lahmacun and pizza. 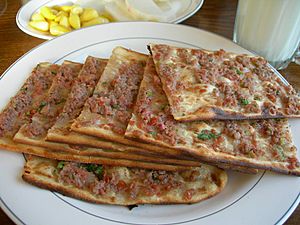 Etli ekmek is a local dish of Konya

Various candies – Konya is known for its sweets, including cezerye, an old Turkish sweet made of carrots

All content from Kiddle encyclopedia articles (including the article images and facts) can be freely used under Attribution-ShareAlike license, unless stated otherwise. Cite this article:
Konya Facts for Kids. Kiddle Encyclopedia.